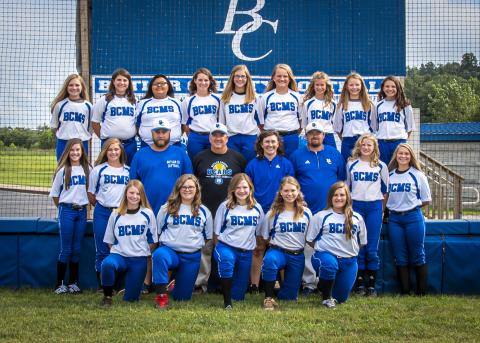 The Butler County Middle School softball team recently finished up their regular season with a win on the road at Bowling Green earlier this week.  With that win, the BCMS "A" team finished the regular season with a 19-7-2 overall record, surpassing last year's successful 18-win season.   The Bears head to Owensboro on Friday, September 27, for a double-elimination end-of-season state tournament (Regions 1-4) at Panther Creek Park.  Butler will face Allen County-Scottsville in the opening round.

The 2019 BCMS Bears have had success with a good mixture of older, experienced players and several younger ones with also plenty of playing experience.  8th graders Madison Clark (catcher), Mia Thomas (1B), Karlee Cameron (3B), Jalyn Embry (LF), and Addison Miller (CF) have joined with 6th graders Tinslea Belcher (P), Parker Willoughby (2B), Karrington Hunt (SS), and Miley Franzell (RF) to make-up the primary line-up for the "A" team.

The BCMS "B" team also turned in a solid year with a final regular season record of 10-4-1.  While Hunt, Thomas took care of the pitching and Willoughby and Cameron shared catching duties, several other players made up the core of the team and played a variety of positions.  They are 8th graders Lola Clark and Stormee Flint; 7th graders Skylar Schroeder, Jordyn Embry, Lydia Brown, and Jaycee Crank; and 6th graders Isabella Easley, Parker Smith, and Isabella Embry.

Both teams showed improvement and growth throughout the season.

"This has been a great group of girls to coach and very supportive parents to work with," said head coach John Embry.  "We've had a great season and we hope to finish strong in our end-of-season tounament."