BCMS Football season underway with games against McLean and Muhlenberg 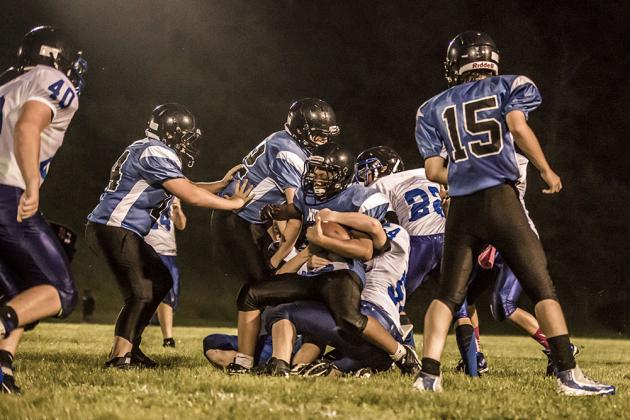 The Butler County Middle School Bears were at home Thursday, Aug 18th to face the Muhlenberg Mustangs. The 7th grade game kicked off first with the Bears wining 30-0. The 8th grade fell 0-6 in a hard-fought contest.

The 7th grade bears wasted no time getting started, forcing a Muhlenberg County fumble on their first possession. The Bears' offense took over on the Mustangs 15-yard line. Alex Elmore took the handoff on first down, broke a couple of tackles and ended up in the end zone to make the score 6-0.

On defense the Bears continued to swarm the ball, with Walker Inglis and Colton Dunnels making big plays in the backfield. After a Mustangs punt, the Bears took over on their own 45-yard line. A long pass from Jagger Henderson to Solomon Flener got the Bears all the way down to the 3-yard line. On the next play Austin Mahaney made a nice run to get the Bears in the end zone. The 2-point conversion was successful, making the score 14-0 Bears.

After a nice tackle on 3rd down by Elmore, the Bears forced another Mustang punt. The Bears marched down the field after two screen passes to Keegan Grubb and Luke Laughing set them up at the Mustang 20-yard line. Two plays later Alex Elmore ran it in from 15-yards out. A two-point conversion made it 22-0 Bears.

On the next defensive series, Roelan Woosley recovered a fumble to set the Bears up in scoring position. Henderson hit Zack Roberts for a 30-yard gain down the sideline, but the Bears were unable to get another play off before the half. Butler County continued to roll in the second half, scoring again in the 3rd quarter to make the final 30-0.

The opening kickoff went to the Mustangs in the 8th grade game. A long run got the Mustangs in the red zone, but the Bears where able to force a turnover on 4th down after nice tackles from Josh Morris and Jacob Cox. The Bears took over on their own 5-yard line.  Two good runs by Alex Elmore and Carson Carroll put the ball into Muhlenberg territory, but the drive was stalled after the Mustangs intercepted a Bears pass.

Defense remained the story of the game as the Bears held the Mustangs to force a 4th and long. Carson Carroll broke through the line to block a Mustang punt, setting the Bears’ offense up at the 43 yard line. The offense was unable to capitalize after a holding penalty set them back and turned it over on downs.

The Mustangs didn’t have the ball for long after Dylan Roberts forced a fumble that was recovered by Butler County. The offense continued to struggle and the Bears were unable to score before the half, making the score 0-0.

The Bears returned the 2nd half kickoff to the 50-yard line, but fumbled and the Mustangs recovered. The Bears’ defense remained stiff. Lance Lassiter forced a quarterback sack on second down, setting up 3rd and long.  Butler County's defense forced and recovered another fumble, giving the ball back to the Bears’ offense.

The game remained scoreless heading into the 4th quarter. With both teams defenses asserting themselves. The Mustangs finally broke the tie and scored a touchdown to make it 6-0. The Bears’ offense was finally able to get some momentum going after runs by Alex Elmore put them in Muhlenberg territory. Jacob Cox then found Solomon Flener down the side line on a nice pass play setting the Bears up in the red zone. However, a botched hand off on 3rd and short forced the Bears into 4th and long. Butler County called its last time out to set up a play. Solomon Flener was almost able to make a spectacular catch, but the ball hit the ground and the Mustangs took over. The Mustangs' offense was able to run out the clock and escape with a 6-0 victory.

The Bears opened up their season on August 11th at McLean County with 7th grade winning 22-0 and 8th grade falling 16-6.