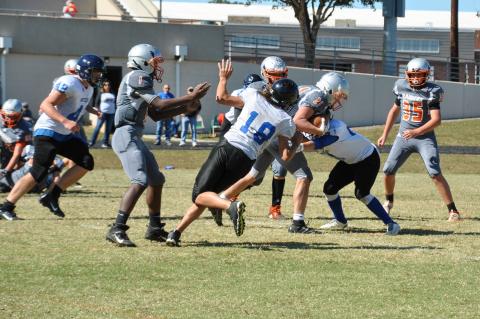 On Saturday, October 12th, The Butler County Middle School Bears traveled to Hart County to face off against the Raiders in Round #1 of the 8th Grade Football State Playoffs. After a strong start and a halftime score of 12-8, the tides turned, and the Hart County Raiders were able to pull off a win. The Bears fell to the Raiders 12-28. This game concluded the season for BCMS Football. "I am very proud of the way both 7th and 8th-grade teams performed throughout the year. I couldn't be prouder to coach such a coachable group of young men. To advance both teams to the GRVC championship, we made a statement in the conference. I wish the best of luck to the 8th-grade group on their upcoming years in high school." – Kory Johnson, BCMS Football Head Coach.

Gage Beasley for the touchdown.

Garrett Phelps with the tackle.

September 28th, the BCMS football team hosted Breckinridge County and Muhlenberg County for the Green River Valley Conference championship. In the 7th grade matchup, the Bears would have their hands full with an adamant Breckinridge county team. The Tigers would lead the half with a score of 14-6. In the second half, the Bears would struggle to get anything going as the Tigers would find the end zone multiple times. Breckinridge would win with a final of 40-6.

In the 8th grade game, the Bears would rally over the Mustangs 28-0 to win the 2019 GRVC Championship. Coach Johnson is delighted with both squads.