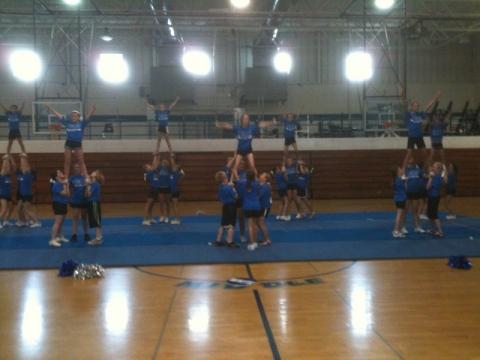 Members of the Butler County Middle School Co-Ed Cheerleading Squad attended Cheer Camp June 7th-9th. At camp they learned new cheers, sidelines, dances, and new stunting techniques. They took all they learned and put it into a camp routine. They performed the routine for family and friends on the last day of camp.

"I am so excited about this season. We have a super-large co-ed squad this year," said head cheer coach Amy Smith-Thomas. "These girls and boys have put forth so much effort and I am very proud of them. We are still learning new things and will continue to work to keep building the program."

The BCMS Cheerleading Program has made history for the school: in area competitions they have been undefeated for the past 3 years and this season is the first time the school has had a total of 35 cheerleaders.

The camp was held at BCMS and directed by Josh and Lori Bewley who own BCC. Josh is a WKU Cheer Coach and his wife is a former WKU cheerleader. It was also organized and directed by Coach Amy Smith-Thomas and new assistant cheer coach Shelby Baseheart.