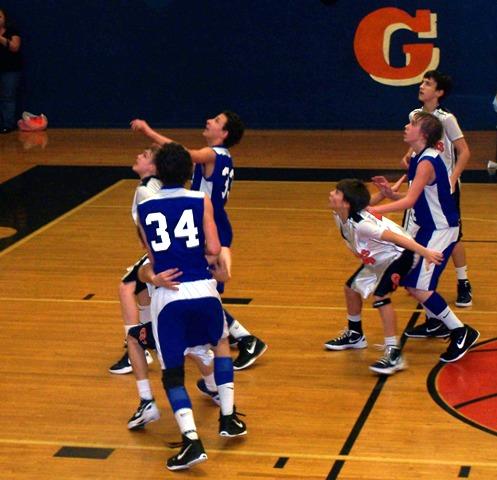 Lots of basketball......that is how you might describe the final week of regular season for the Butler County Middle School boys team.  They packed in three nights of basketball action this week before heading to the GRVC tournament on Saturday.  They started the week at home with a game against Bowling Green Homeschool on Monday night.  Both 7th and 8th grade teams had no trouble coming up with wins.  The Trailblazers gave it all they had but it just wasn't enough to handle this Bears team.  The 7th grade won with a score of 49 - 14.  Blake Graham was the high scorer in this game with 14 points.  Rex Henderson had 11, Bailey Anderson and Kyle Casey both had 8, Ty Burden had 6, and Kaleb Casey had 2.  The 8th grade score was 51 - 14.  High scorer was once again Blake Graham with 14 points.  Rex Henderson had 12, Rodney Woosley 7, Kyle Casey 5, Bailey Anderson 4, Dallas Miller 4, Dylan Inglis 3, and Kaleb Hunt 2.

On Tuesday night the Bears traveled to Bowling Green to face a little tougher competition in the Warren East Raiders.  The 7th grade game left a little to be desired after the first quarter with only 6 total points being scored, 2 for Butler County and 4 for Warren East.  The Bears warmed up in the second quarter though and put 15 more points on the scoreboard  to give them a 17 - 7 lead at halftime.  Bailey Anderson was hot from behind the three point line putting in three 3 pointers.  Blake Graham was  good for two himself at the three point line and led all scorers with 15.  Bailey had a total of 11 points, Rex Henderson 9, Kaleb Casey 3, and Ty Burden 2.  The 7th grade beat the Raiders with a score of 40 - 23.

The real battle of the night though didn't happen until the 8th grade game.  The first half was a back and forth game between the Bears and Raiders with the Bears leading at halftime 17 - 14.  The third quarter ended with both teams having 21 points on the scoreboard and tensions rising.  The Bears found themselves in a quandrey with just a few seconds left on the clock and them trailing by 3 until Nolan Johnson came up big for the Bears and sunk a 3 to send the game into overtime.   What a game this shaped up to be as one overtime just wasn't enough to get a winner.  It took two overtimes before the Raiders were able to take down the Bears with a score of 44 - 39.  Scoring for the Bears was Blake Graham 12, Nolan Johnson 8, Bailey Anderson 7, Rex Henderson 6, Dallas Miller 3, and Dylan Inglis 3.

The Bears rounded out their regular season on Thursday night with a rain filled trip to Grayson County.  And rain is what it did during the 7th grade game, points that is.  Blake Graham was unstoppable and tied his season high scoring with 30 points.  The Bears won this one easily with a score of 54 - 32.  Rex Henderson contributed 14.  Ty Burden had 4, Kaleb Casey 2, Kyle Casey 2, and Kaleb Hunt 2.

The 8th grade team just ran out of steam as they faced off with the Cougars of Grayson County for the second game of the night.   Dallas Miller came out strong in the first quarter, scoring 8 points of the Bears 12 points, but the Cougars matched that and then some.  The Bears just couldn't find the momentum to stay with the Cougars and were just outplayed as the Cougars lead kept building quarter after quarter.  The Bears went on to lose this one with a score of 51 -33.  Dallas Miller didn't score again after the first quarter but was still the Bears high scorer with 8.  Blake Graham had 6, Bailey Anderson 5, Rex Henderson 5, Nolan Johnson 4, Austin Nave 3, and John Chapman 2.

The Bears will be in tournament action next week as the GRVC tournament kicks off Saturday, January 28th and goes into the next week.  Look for articles in Beechtree as to how the Bears are doing in tournament play.