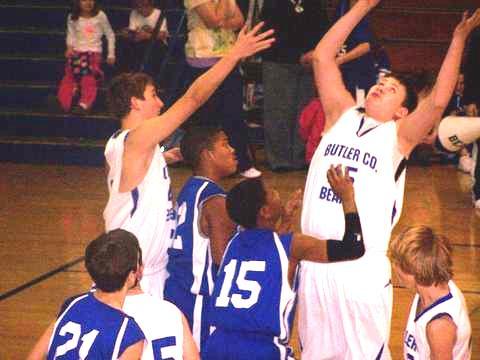 As the regular season of boys middle school basketball comes to a close in a week, the boys team found themselves in their white, home uniforms for the second week in a row.  Although the Bears are preparing for conference tournament play next weekend, they squared off with two non-conference teams this week.  Even though these games didn’t have any conference seeding implications they were important games for  the Bears none the less.  On Monday the Bears came up against a much talked about opponent in the South Warren Spartans, and Tuesday night was 8th Grade Night so the Bears were hungry for wins on both occasions.  The 7th grade team took the floor Monday night expecting quite a battle from South Warren but soon realized that the Spartans weren’t going to be much of a match for the Bears as the first quarter ended with the Bears having scored 14 and the Spartans remaining scoreless.  The entire game stayed much this way thanks to the Bears great defense and the Spartans having difficulty putting it through the hoop.  The final score was Bears 50 Spartans 25.   Blake Graham and Rex Henderson both scored in double digits with 18 and 12 points respectively.  Also scoring in the 7th grade game was Bailey Anderson 7, Kyle Casey 6,  Ty Burden 3, Kaleb Casey 2, and Brennan Grubb 2.  Top scorer for the Spartans was former BCMS player Ryder Litten with 13.

The 8th grade game on Monday night got off to somewhat of a slow start for the Bears as they struggled to score and had only 2 points at the end of the first quarter.   The Bears scoring woes continued throughout the first half as they went to the locker room with only 11 points at halftime.  Thank goodness for the Bears, the Spartans didn’t fare to well in the scoring department either and only had 17 themselves at halftime.  This game proved to be a barn burner in the second half as it went down to the wire with the Spartans leading by one with less than 10 seconds left on the clock.  Rodney Woosley drove down the court and scored a lay up to give the Bears the lead and then came up with an awesome defensive play to block what could have been the game winning shot as time ran out on the clock.  Leading scorer for the Bears was Blake Graham with 10.  Rex Henderson had 7, Rodney Woosley 4, Bailey Anderson 2, John Chapman 2, Nolan Johnson 2, and Dallas Miller 1.   The final score was 28 – 27.

On Tuesday night,  the Scotties from Glasgow came to town for 8th Grade Night.  It may have been 8th Grade Night but that didn’t stop the 7th grade  team from taking care of business.  They charged out of the gate to take an impressive lead and just kept building on it throughout the game.  Scoring for the 7th grade team was evenly dispersed with 3 players getting in double figures.  Blake Graham had 12,  Bailey Anderson had 11, and Rex Henderson had 10.  Also scoring for the Bears was Kyle Casey with 6, Kaleb Casey 4, Ty Burden 2, Skyler Moore 2, and Brennan Grubb 1.  The Bears won this game with a score of 48 – 28.

The main event of the night, 8th Grade Night (look for pics on BeechTree), followed the 7th grade game.   The 8th grade game got off to yet another slow start much like Monday night’s game with the Bears only scoring 3 points in the first quarter.  However, Blake Graham, Rex Henderson and Dallas Miller found the bucket in the second quarter and combined for 14 points to give the Bears a lead going into the locker room at halftime.  The second half was all Bears and they expanded their lead and all but shut down the Scotties. The Bears had several second and third chance looks at the basket due to some remarkable rebounding.  Dallas Miller led the night with over 20 rebounds himself.  The Bears went on to win this one quite easily with a score of  46 - 22.    Leading scorer for the Bears was Rex Henderson with 12.  Dallas Miller and Blake Graham both contributed  10 points.   Also scoring was Nolan Johnson 6, Bailey Anderson 4, Dylan Inglis 2, and Jacob Skipworth 2.