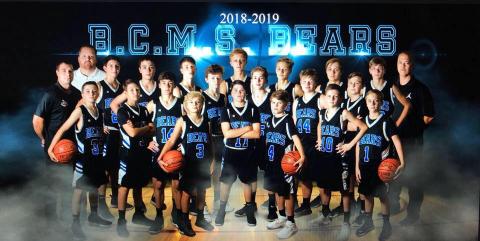 The 2018-19 season is off to a great start for the BCMS Bears with both the 7th and 8th grade teams positively progressing daily. Less than a month away from the GRVC tournament, which will start January 25th at Mclean County, the 7th grade Bears hold a record of 11-7 overall and 3-2 on their side of the GRVC. Two of those losses coming from Muhlenberg North, a loss to Warren East, Owensboro Catholic, Grayson County, Moss, and Drake’s Creek round out the losses for the Bears so far this season. The young Bears have responded well and returned the favor to Grayson County and Warren East after suffering losses early in the season to both teams. Coach Dustin Barnett said, “This 7th grade group does not like to lose and when they do, they come to practice ready to fix their mistakes from the previous game, and are always looking to improve. Their drive to become better is unrivaled and it has me very excited for the future.” Unfortunately, the Moss game was cancelled due to weather and will not be made up, but Drake’s Creek is scheduled to come to Morgantown January 17th, so we will see how the Bears have progressed since an early loss against the Gators. The 7th grade Bears also participated in the South Warren invitational where they fell short in a close game against Owensboro Catholic to begin the tournament, but responded with a victory against South Warren in the consolation game. A few of the other quality wins for 7th grade include a win against Muhlenberg South, Hancock County, and Ohio County.

The 8th grade Bears hold a solid record of 12-12 overall and 3-2 on their side of the GRVC after facing a very tough opening schedule against some of the best competition around. Grayson County has had the Bears number so far this season beating them twice in the regular season and once in tournament play at South Warren’s Spartan Invitational. Muhlenberg North and Warren East have handed two losses a piece to the Bears, and the other losses have come from Hancock County, South Warren, Daviess County, Drake’s Creek, and Moss. First year Coach Adam Stovall stated, “We’ve watched this 8th grade group grow into young men throughout the season from the beginning with camp at Tennessee Tech, all the way up to now, their growth has been outstanding. Their fire and toughness is unmatched and this has helped them become a much more physical group.” The Bears have participated in two tournaments so far this season and came out as runner-up in both. The first was held at South Warren where the Bears started the day off with a victory against Owensboro Catholic to make it to the championship game against Grayson County, but fell short against the Cougars to take home second place at the Spartan Invitational. The second tournament was held in Russellville with the Bears winning two games to begin the day against University Heights Academy out of Hopkinsville and GRVC foe Mclean County. This earned the Bears a trip to the championship game where they faced a very, very tough Daviess County team and fell short to place runner-up. Other significant wins for the Bears include victories over Muhlenberg South, Breckenridge County, and Edmonson County.

Both 7th and 8th grade teams will be back in action after a long break against Ohio County at their place on Thursday, January 3rd. This is one of three remaining GRVC conference games for the Bears that will affect their seeding for the GRVC tournament. The other two conference games being against Mclean County at home for 8th grade night on January 10th and away against Muhlenberg South on January 15th. Other remaining games include Russellville (Home), Edmonson (Away), St. Romuald (Away), Drakes Creek (Home), and Breckenridge County (Home). The Bears will conclude their season with the GRVC tournament which is set to begin on January 25th with Mclean County hosting this year. Come out and support these young Bears if you are able to for one of their remaining games, and GO BEARS!