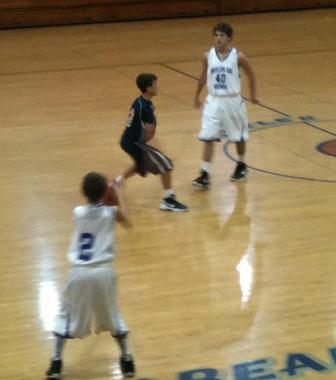 Butler County Middle School boy's basketball had a busy week.  The Bears started the week with their first home game of the season facing arch rival Grayson County.  The bears proved to be too much for the Cougars in both 7th and 8th grade games.The 7th grade came out strong in the first quarter showing their dominance and outscored the Cougars 25 to 9.  Blake Graham lit it up for 13 points in the first quarter himself.  The Bears continued to build upon that lead and went to the locker room at halftime with a score of 43 to 14.  The second half was all Bears as well with the score ending 53 - 35.  Leading scorer for the Bears was Blake Graham (17), with Bailey Anderson (15) and Rex Henderson (12) scoring in double figures as well.  Also scoring was Kyle Casey with 7 and Ty Burden with 2.


The 8th grade team took the floor for the second game of the night and it appeared that things might not fair as well for the Bears this game.  The Cougars took an early lead and outscored the Bears 15 to 7 in the first quarter, but Rodney Woosley came on strong for the Bears defensively and put up 9 of 19 points that the Bears scored in the first half bringing the Bears to within one at halftime.  The second half was a different story as the Bears came out of the locker room with focus and determination.  Shots started to fall and the Bears brought home the win with a score of 44 - 37.  Leading scorer for the Bears was Rodney Woosley with 11 points.  Rex Henderson had 10, Blake Graham 8, Bailey Anderson 7, Nolan Johnson 4, John Chapman 2, Dallas Miller 2.


On Tuesday night the BCMS Bears traveled to Russellville to face off with the Panthers.  7th and 8th grade teams took the lead early on in both games and neither game was really a contest.  Some excellent Bear defense during the 7th grade game all but shut down the Panthers offense only allowing them to score a total of 8 points.  7th grade went on to win scoring 43 points.  Bears were led in scoring by Blake Graham with 12.  Bailey Anderson scored 8, Kyle Casey 8, Kaleb Casey 3, Rex Henderson 2, Kaleb Hunt 2, Ty Burden 2, Skyler Moore 2, Patton Allen 2, and Corbin Hoffman 2.  The Panthers 8th grade team kept the game a little closer but the Bears had no difficulty in pulling out the win.  Nolan Johnson had the hot hand for the Bears during this game scoring 12 points.  Others scoring were Blake Graham 10, Rex Henderson 6, Rodney Woosley 5, Bailey Anderson 4, and Dallas Miller 2.  Bears won this one with a score of 39 - 26.


The Bears wrapped up the week on Thursday night with another road trip, this time to Muhlenberg North.  The 7th grade team got off to a rough start and the woes continued as they couldn't find the right combination to shut down one player for North who single handedly outscored the Bears giving them 21 of their 24 points in the first half all of which were 3 pointers.  The second half proved to be a struggle as well for the Bears with shots not falling and going 11 for 26 from the free throw line.  The 7th grade team was dealt their first loss of the season with a score of 53 - 46.  Rex Henderson was the leading scorer for the Bears with 17 points.  Blake Graham had 14, Bailey Anderson 12, and Kyle Casey 3.


The 8th grade team, determined not to have a repeat of the 7th grade game, started the game with a strong defensive push holding the Stars scoreless in the first quarter and only allowing them 3 total points in the first half.  The Bears, on the other hand, had no problem finding the basket and scored 25 points the first half.  North came out the third quarter with a little surge but it wasn't anything the Bears couldn't handle.  8th grade easily won with a score of 41 - 17.  No Bear got into double figures but several Bears did get on the scoreboard.  Scoring for the Bears was Rodney Woosley 9, Rex Henderson 9, Blake Graham 8, Dallas Miller 7, Nolan Johnson 6, Bailey Anderson 2.


Bears will be in action next week with home games on Monday and Tuesday.