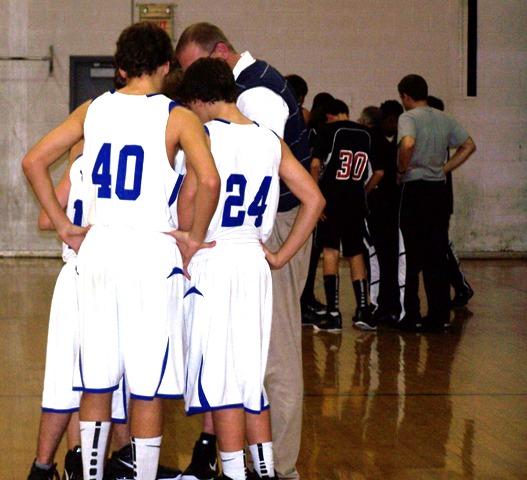 After a little time off for celebrating Thanksgiving, BCMS Bear's Basketball was back in full swing this week with three games, one at home and two away. The Bears started the week with a home game against McLean County.  On Tuesday, they hit the road for an away game at Muhlenberg South.  The Bears 8th grade team was looking for some revenge in this one after a hard fought loss just the week before to the Suns.   The Bears rounded out the week with a trip to Ohio County to face the Eagles on Thursday night.

This week proved to be a spectacular week of basketball action for the 7th grade team which picked up three wins moving them to 9 wins and only 1 loss on the season.  The Bears won handily in all three games and never trailed the competition.  Other teams struggled to find an answer for the Bears starting line up that consists of Rex Henderson, Blake Graham, Bailey Anderson, Kyle Casey, and Kaleb Casey.  Coach Dockery also has the luxury of a deep 7th grade bench which allows him to rest his starters so they will be ready for the 8th grade games that follow.  The Bears defeated McLean County 50 - 28.  Blake Graham (15 pts), Bailey Anderson (13) and Rex Henderson (10) all scored in double figures in this one.  Also scoring against McLean County was Kaleb Casey 6, Kyle Casey 4, Caleb Beasley 4 and Austin Norris 2.  It was much the same when the Bears played Muhlenberg South.  They won this one with a score of 55-21.  Rex Henderson was the high point man this time scoring 14.  Others scoring were Blake Graham 11, Bailey Anderson 8, Ty Burden 7, Brennan Grubb 6, Kyle Casey 4, Kaleb Casey 2, Caleb Beasley 2, and Kaleb Hunt 1.  The score in the final game of the week against Ohio County was 46 - 28.  Blake Graham was a scoring machine in this one putting in 26 points.   Bailey Anderson scored 10, Rex Henderson 6, Kaleb Hunt 2, and Ty Burden 2.

Unfortunately for the 8th grade team, spectacular wasn't quite the way to describe it.  They did come out of the week with a good win over McLean County but lost two tough ones against Muhlenberg South and Ohio County bringing their record to 7 -3.  The Bears came out a little sluggish in the first half against McLean trailing at halftime by 7; however, a key basket by Nolan Johnson gave the Bears the lead in the third quarter which was followed by steals by Blake Graham and Rex Henderson to give the Bears the momentum swing they needed.  The Bears went on to win this one 43 - 36.  Lead scorer for the Bears was Rex Henderson with 15.  Rodney Woosley also had a hot hand and contributed 14.  Others scoring were Dallas Miller 6, Nolan Johnson 3, Bailey Anderson 3, Blake Graham 2.   On Tuesday night the Bears found themselves at the home of the Muhlenberg South Suns looking for a little revenge.  It was apparent from the beginning of the game that the Bears meant business.  They led the Suns in scoring for the first three quarters but fell a little short in the quarter that mattered the most and ended up losing in a barn burner, last second decision by putting Sparks on the line with 1.5 seconds left and he sunk one to give the Suns the win with a score of 32 - 31.  Scoring was evenlly dispersed among the Bears with Blake Graham scoring 8, Dallas Miller 6, Rodney Woosley 5, Ian Embry 5, Bailey Anderson 3, Rex Henderson 2, Nolan Johnson 2.  Bears rounded out the week in Ohio County to face an aggressive Eagle's team.   Butler County started out pretty sluggish against the Eagles and had some shooting woes early on going into the locker room at halftime 2 for 13 from the 3 point arc.  Even with that the Bears were only down by 1 at halftime; however, Ohio County came out in the third quarter lighting it up and pulled away from the Bears.  Butler County didn't roll over and play dead though.  They clawed back with the help of Rex Henderson's four 3's on the night and Rodney Woosley sparking the Bears with some key steals to bring them within 2.  The Bears, however, couldn't pull it out in the end and lost 40 - 38.  Leading scorer was Rex Henderson with 17.  Rodney Woosley had 10, Blake Graham 5, Nolan Johnson 4, and Bailey Anderson 2.