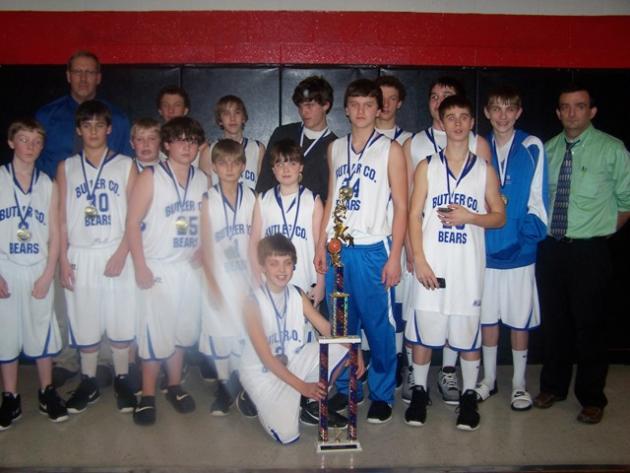 It was loud and electric in the Hancock County Middle School gym as Butler County's 7th grade team took the floor to take on the Muhlenberg North Stars in the GRVC Championship on Thursday, February 2nd.  These two teams had won a game a piece when playing each other in the regular season, and the Stars were the only team all season to beat the Bears 7th grade team.  The Bears, with the number one seed, had played earlier in the week, taking on Breckinridge County, a four seed, in the first round of GRVC action.  BCMS rolled past the Tigers of Breckinridge with a score of 53 to 10.  On Monday night, the Bears traveled back to Hancock County.  This time they would square off against McLean County.  Blake Graham came out strong in this game, contributing 22 points for the Bears, and leading BCMS to another easy win over McLean County with a score of 50 to 22.

With the cheerleaders present and fired up, the BCMS 7th grade team was obviously focused and determined to give the crowd what they wanted......a championship!  And, that is exactly what they did and in dominating form.  The Bears came out with a full court press that created several turnovers for the Stars and lots of steals for the Bears.  Coach Calvin Dockery, with a focus and determination of his own, was forced to scream over the crowd commands to his team.  The team, llke a well oiled machine, took control early in the game and just kept driving it home.  The Bears never trailed and finished with an impressive 20 point lead over the Stars to win 40 - 20.  Rex Henderson was the high point man on the night with 19 points.  Blake Graham also got in double digits with 12.  Baylee Anderson had 4, Kaleb Casey 2, Kyle Casey 2, and Kaleb Hunt 1.

After the 8th grade championship game, the celebrating began with the presentation of individual medals for the Bears and a team trophy followed by the cutting of the nets.  The fun didn't end there, as the team's bus, loaded with players and cheerleaders, was met by law enforcement as it came into Morgantown's city limits and was given a police escort through town followed by a large procession of proud fans honking and flashing lights.  The Bears had a very successful season.

The 8th grade team was also in action this week in the GRVC tournament.  They got a hard fought win over the home team, Hancock County, in the first round.  The 8th grade team traveled back to Hancock County on Tuesday night to face Grayson County.  These two teams had split during the regular season with each team getting the win on their home courts.  The Bears came out a little sluggish in this one and just couldn't seem to make up the deficit.  The 8th grade team had a good run but bowed out of the GRVC in the second round.