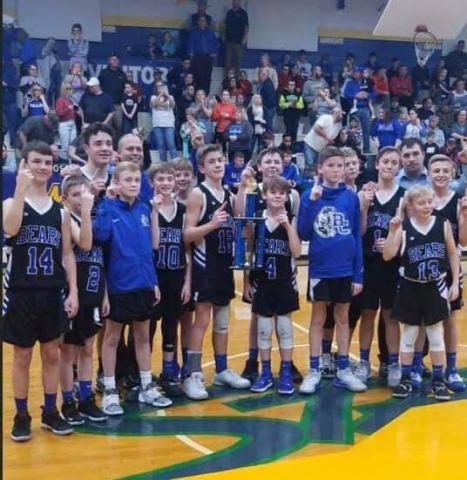 After a terrific regular season going 19-13 and playing some of the best competition around southcentral Kentucky, the 7th grade Bears earned themselves a 2 seed in the GRVC tournament. In the first round, which is being held at Muhlenberg North Middle School, the Bears faced off against Breckenridge County who was the 3 seed on the East side of the GRVC. “We found ourselves down by 4 at half, 17-13, and knew that we were much, much better than that score showed” Coach Barnett stated. Thankfully, the Bears showed up in the second half and were able to defeat the Tigers by a score of 39-33. Briar Griffin led the Bears in scoring with 11, but it was a very balanced attack all night. Clayton Deweese had 6, Justin Castlen had 5, Trever Deweese had 7 and led the Bears in rebounding, Tucker Dejarnette had 9, and Case Hooten chipped in a big free throw late in the 4th quarter.

The semi-finals were set and had the Bears matched up against Grayson County who Coach Stovall and Coach Barnett are very familiar with this season. They played the Cougars 4 times before this semi-final matchup and split 2 games to 2, but Grayson County had won the last 2. Preparation was key. “We jumped out to a 16-8 lead after the first quarter and never looked back”, Coach Adam Stovall explained. Grayson County did hit a last second three point shot to end the half bringing the Cougars within 9 for a halftime score of 25-16 in the Bears favor, but that was all the momentum the Bears would allow them to have. The third quarter ended with us outscoring Grayson by a score of 10-2, which led to a final score of 46-23, Bears win! Briar Griffin  and Tucker Dejarnette led the team in scoring with 10 a piece and Dejarnette also led the team in rebounding. Clayton Deweese had 8 points, Justin Castlen had 8 points, Trever Deweese with 6 points, Case Hooten and Stephen Bastin both chipped in 2 points as well.