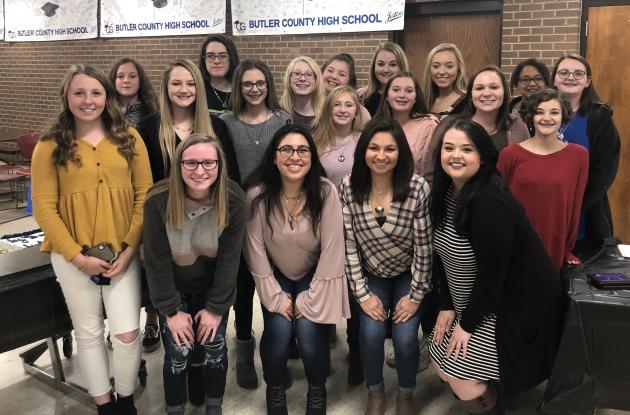 Monday, November 11th, the BCHS Volleyball team had their 2019 banquet.  The coaches talked about highlights of the year and recognized players for team and individual achievements.  The Junior Varsity team ended the season with a 12-4 record.  This was by far the best season any JV team has had.  Coach Flener mentioned how happy he was with the girl’s progress and that they had made huge improvements throughout the year. Coach Minton discussed the 14 individual records that were broken this season along with the team record of 15-9.  She also mention how proud she was that the girls had a combined GPA of 3.56.  Listed are all the awards from the banquet.

Most Serves, Most Aces, and MVP : Jenna Johnson

Most Digs and Most Kills: Olivia Johnson

Most Aces and MVP: Autumn Gidcumb

Most Digs and Most Hustle: Abby Dockery

Most Kills, Most Blocks, and Most Improved: Grace Embry

Most Serves, Most Aces, and MVP: Autumn Gidcumb

Most Digs and Most Hustle: Abigail Dockery

Most Kills and Sportmanship: Delaina Flener

Most Blocks and Most Improved: Grace Embry