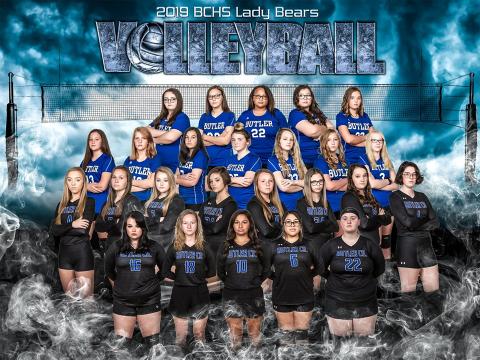 The Lady Bears Volleyball Team had a very busy week before taking some time off for fall break.  On Monday night the girls hosted Frederick Fraise. The JV team got things started off right by winning in straight sets.  The JV team continues to make improvements. Solid serving is the consistent skill that the team makes the most of in each game.  The varsity team followed suit and also won in straight sets, 25-11 and 25-20.  Butler sometimes starts slow, but not this time.  The Lady Bears were in control from the first serve.

On Tuesday night Butler faced Whitesville Trinity in their last district game of 2019.  The freshman team played hard but lost in straight sets.  Coach Dockery is proud of the effort that the girls have given.  JV also played hard but came up short.  This was only the 4th loss of the year for the JV squad.  The varsity game was an exciting one that saw the girls fall in the first set 15-25.  “It seemed that we could not get going in the first set,” said Coach Minton. The second set was played much cleaner by the Lady Bears and they edged out to a 25-21 victory.  The third set was back and forth until Trinity got on a roll and held the lead at 18-13.  Butler then went on a roll of their own and took control of the game winning 25-21.  In the fourth set the Lady Bears jumped out to the lead and never let up, cruising to a 25-15 victory, winning the match 3-1.  This was the first time that Butler has ever beaten Trinity in volleyball.  Also it was the girl’s 12th win of the season, which is a school record.

On Thursday the girls traveled to play Franklin-Simpson.  The freshman team fought hard but came up just a little short. The JV team won 2-1.  With the victory the junior varsity improved their record to 9-4, the most wins by any JV volleyball team in BCHS history.  Coach Flener is very proud of the team and the effort that each girls gives.  The varsity team came out flat against Franklin, who they defeated earlier in the year, and lost 1-2(17-25, 25-21, 22-25).  “After the big win on Tuesday we were afraid of a let done and that’s what happened”, said Coach Minton.  The varsity team is now 12-8. During fall break the team will not have any games but return to action at Caverna on October 14th, at Barren County on October 15th, then home vs Caverna for the last game of regular season on October 17th.