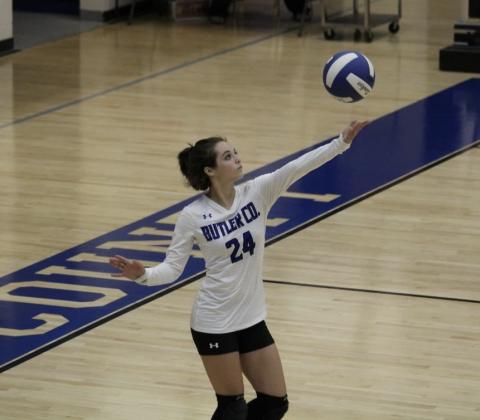 The Lady Bears Volleyball team was busy last week.  On Tuesday they hosted Barren County Trojanettes in a freshmen-junior varsity-varsity match up.  It was the first game of the year for the freshmen team, who only have two true freshmen. The girls fought hard but lost in straight sets.  Coach Dockery is proud of the progress the girls have made especially since nine of them have never played until this year.  The JV team took the first set with little difficulty and started strong in the second set, but seem to lose focus halfway through and dropped the second set.  A third set was much the same with the girls falling for the first time this year.  Communication was the girl’s major issue.  The varsity team played well defeating Barren in straight sets 21-15 and 21-16.  Lilly Gidcumb showed out with some strong serves, 21 total, 9 of which were aces.  That broke the school record for aces previously held by her sister, Autumn, at 7.

Thursday night the Lady Bears fell to Grayson County in freshman, JV and Varsity games.  Although the young freshmen did not win there are defiant signs of improvement.  The team is made up of nine middle school students and only two freshmen.  The JV team could not find their rhythm early on, but rallied to make the first set close losing 18-21.  Second set saw Grayson take control and never look back as the lady bears fell 12-21.  Grayson County is the defending district champion and showed why on Thursday night defeating the lady bears in straight sets; 25-10, 25-15, and 25-16.  “Grayson is a complete team and the best that we have faced all year,” says Coach Minton.

Saturday, Butler traveled to Metcalfe County and played five games in a tournament hosted by Metcalfe.  In “pool play” Butler defeated Monroe County 2-0, but lost to North Hardin 1-2 and Western Hills 0-2.  After “pool play” the teams were then place into the tournament according to their placement in the “pool”.  The Lady Bears then defeated Adair County in straight sets, then lost to Glasgow 1-2, with the last set going to sudden death and the girls coming up short 14-15. The varsity team is now 8-4 and will face Franklin Simpson at home on Monday, then travel to Edmonson County on Thursday for a tough district game.