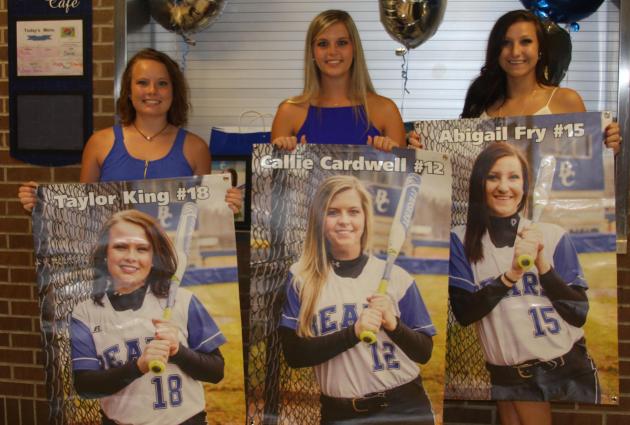 A few weeks after Butler County dropped a 5-4 decision to Grayson County in the 12th District Softball Tournament, the Bears 2016 season came full circle with the team's annual awards banquet.

The Butler County varsity squad finished the season with an 18-13-2 record, while the junior varsity squad notched an 18-7 record.

The first order of business was to recognize the academic achievements of the team.  Senior Taylor King and juniors Madison Clark, Maddie McKinney, and Zoie Pendley were named to the Kentucky Softball Coaches Association (K.S.C.A.) All Academic 1st Team (G.P.A. 3.75 and above); junior Ashlynne Brooks was named to the 2nd Team (G.P.A. 3.5 to 3.74) and senior Callie Cardwell was Honorable Mention (G.P.A. 3.25 to 3.49).  K.S.C.A. recognition was limited to juniors and seniors who played in at least half the varsity games.

Continuing with the recognition portion of the banquet, Madison Clark was recently named to the East-West All-Star game as voted on by coaches in Regions 1-8.  She took part in the All-Star weekend June 17-19 on the campus of Georgetown College and  competed against All-Stars from Regions 9-16.  Clark also received Honorable Mention All-State recognition from the K.S.C.A.

Senior center-fielder Taylor King was named to the All Academic Team.

The following team awards were presented:

Booster Club recognized seniors King, Fry and Cardwell for their contributions to the softball program.

Field manager Heath Chaney was recognized for his help.