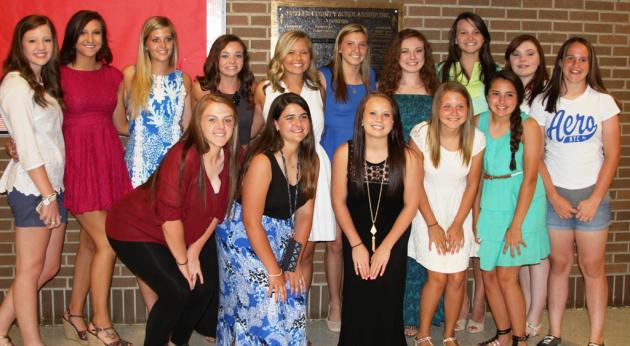 Individual awards were given and team accomplishments were recognized recently as the Butler County High School Bears' softball team held its 2015 banquet.  The Bears finished the season with a 24-13 record, were runner-up in the Hancock County Lady Hornet Classic, were runner-up in the 12th District Tournament, and advanced to the Third Region Tournament.  Butler County has finished with at least 20 wins in seven of the last eight years and has advanced to the regional tournament in each of those 20-win seasons.
The Bears JV squad finished with a successful 15-5-1 record for the season.

The banquet was held June 15 at the Commons Area at Butler County High School.

Emily Rich, Kassie Phelps, and Taylor King were recognized for their role as team captains.

Rich and Phelps were also presented with gifts as the two seniors on this year's squad.

"We had a very successful season and it was honor to take the time to recognize our players for their many accomplishments on an off the field," said head coach John Embry.  "This is quality group of young ladies and I'm really proud of them and their parents for their commitment to our softball program."

Coach Embry also recognized the school district for their continued support of the softball program.

"From transportation to umpires, from facility upgrades to general expenses, we're grateful to the high school and middle school administration, as well as Supt. Howard and Central Office for all they do to make our season a success," added Embry.