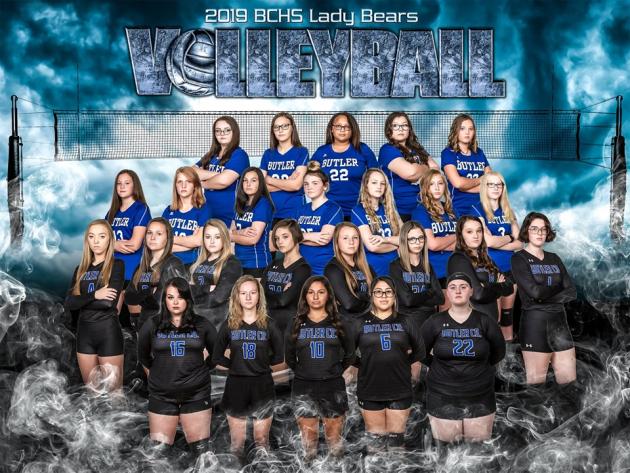 Last week was a tough one for the Butler County High School Volleyball team as they lost to Todd County at home on Monday and to Grayson on the road Thursday.  The junior varsity took out Todd County in straight sets, 21-1 and 21-15.  Yes that first set is correct, 21-1. Sophomore, Autumn Gidcumb served for 20 straight point, several aces.  “Autumn has an extremely strong serve.  When she is able to place it, she adds an extra element to our game,” said coach Flener. The JV team is now 6-3.  Todd County came to Morgantown to avenge and early season loss to the Lady Bears, and were successful defeating Butler in straight sets, 25-16 and 25-20.  The biggest issue for the girls was passing the ball. It seemed that the girls could never get together, play was very sluggish.  Autumn Gidcumb continued serving well, but that was about the only bright spot for Butler.

On Thursday the girls traveled to Grayson County High to play a Freshman/JV/Varsity games.  The freshman team played hard but fell in straight sets.  The young Lady Bears continue to improve and work hard.  The JV team fell to the Lady Cougars 1-2 sets, playing much better against Grayson than a few weeks ago at home.  The varsity team played well but lost in three straight sets.  In the first set Butler jumped out to an 8-0 lead behind Autumn Gidcumbs serving, but Grayson rallied and tied the game up.  It went back and forth until Grayson won 25-23.  The second set was much like the first with Butler jumping out to a 7-1 lead only to see the Lady Cougars go on a 24-8 run to win 25-15.  Grayson took the lead in the third set and never looked back winning 25-15.

Up next for the Lady Bears is Frederick Fraize on Monday, Whitesville Trinity on Tuesday, both at home, and then travel to Franklin Simpson on Thursday.