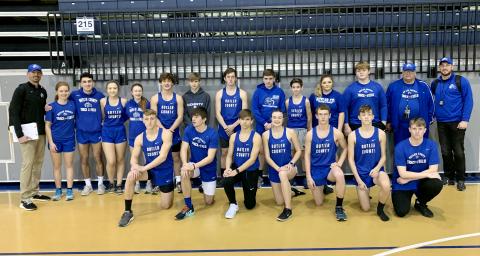 Teams from across Kentucky, as well as some from Tennessee, traveled to Murray St. University this past weekend to compete in the West Region indoor track & field meet at the CFSB Center. For the first time in school history, Butler County High School was one of the 14 teams competing. Butler County has never competed in an indoor track season, which runs from mid-January until March 7th, but after a solid performance on Saturday Coach Fuller says it’s something he hopes to continue in the years to come.

“It’s a great opportunity for us to compete early in the year and get a head start before outdoor season begins in mid-March. “ I’m really proud of the hard work and commitment these athletes have put in to make indoor season possible; it’s something I look forward to continuing in the future.”

The Bears finished in the top half of the meet with a 3rd place finish on the boys side, while the girls earned 5th place overall.  Both Boys and Girls teams had several top 4 individual performances. On the boys side Trenton Stovall placed 2nd in the 55m hurdles with a time of 8.86; Landon Binion also finished 4th in the event with a time of 9.54.

Trentin Embry finished 4th in Shot Put with a personal best throw of 38-0.75.

Paige Alford was the only first place finisher for the Bears, winning the shot put with a throw of 31-3.5.

Caroline Chambers was 3rd in the high jump clearing 4-2 and also finished 4th in the 55m hurdles with a time of 11.86.

The Bears next indoor meet is February 1st at the University of Kentucky in Lexington.