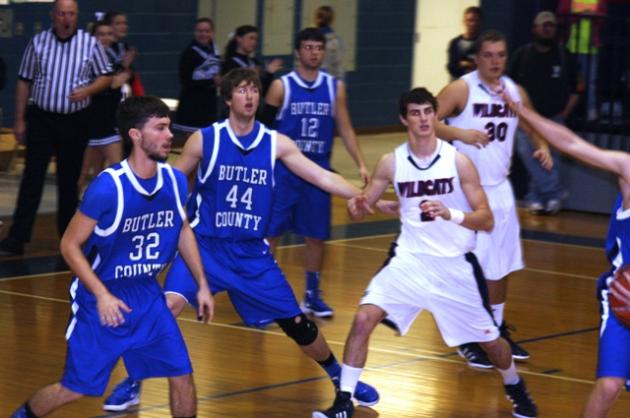 After out of district match-ups early in the week it was time for the Bears and Lady Bears of Butler County High School to return to district action on Thursday night. Their opponents were a pair of struggling basketball teams for Edmonson County High School. The Lady Cats came into the game winless at 0-4, and the Wildcats weren’t much better with a 1-5 record.

Coach Mike McClintick’s Lady Cats have been slowed by injuries with two of their best players from a year ago, Madison Rich and Paige Carnes, out of the starting lineup with knee injuries. What the Lady Bears didn’t know going into the game that both girls had been cleared earlier in the day to play limited minutes in the ballgame. For Rich and Carnes limited minutes would be enough to get the job done on Thursday night.

Edmonson County won the opening tap and less than a minute into the contest Hannah Clemmons hit an open three-point shot off the right wing to give the Lady Cats a lead they would never surrender on the way to a 46-25 victory in front of their home fans.

Sophomore Katie Graham and Freshman Shawna West were able to keep the Lady Bears close through the first quarter. ECHS led 10-9 after the first period and it looked like the two teams might battle to a standstill. Unfortunately for the Bears leading scorer Madeline Drake was saddled with two fouls in the first period and could only play sparingly until after the first half. BCHS was unable to find an answer for the Edmonson defense in the second. Numerous turnovers and a lack of rebounding left the Lady Bears only scoring 4 points in the period and the Lady Cats owned a 24-13 lead at the halftime break.

Things got no better for the Lady Bears in the second half. With Carnes and Rich coming off the bench to pace his team Coach McClintick was able to build a 20 point lead at the end of the third quarter and the game was never in doubt. With both coaches going well down the bench in the fourth period the Lady Cats grabbed their first win of the season by the final score of 46-25. The Madison Rich led all scorers with 16 points. Shawna West paced the BCHS scoring with 9 points. The Lady Bears won’t play again until after Christmas, returning to action on December 27th in the Greenwood Holiday Classic where they will open play with a game versus Warren East. The Lady Bears will play four total games in the holiday showcase including games versus Caverna and Franklin-Simpson. The next home game for the Lady Bears will be January 5th when they host Breckinridge County.

The nightcap pitted longtime ECHS Coach Daryl Travis and his one-win Wildcats against a Bears team coming of a win at Whitesville Trinity and an upset road win against Todd County Central High School.

Early on the Wildcats looked determined to grab a win versus their rival at home. Josh Milam scored 7 points in the first quarter and the rowdy students in Wildcat Alley were on their feet with a 13-9 lead after a period of play. The Bears were slowed by turnovers in the first period, but started to settle into a rhythm late in the period. The second period opened with a flurry of Butler County points and defensive stops for the Bears. Coach Travis used two timeouts to try to settle his team, but BCHS had figured out how to beat the ECHS defense. The Bears used a balance scoring attack to outscore the Wildcats 15-7 in the second period and take a 24-20 lead into the locker room at halftime. Elijah Flener and Jackson Washer had 6 points each for the Bears in the first half, with Trevor Jenkins adding 5 points and 4 points for Dylan Goodall.

ECHS attempted to take the ball into the teeth of the Bears defense to start the second half. Josh Milam hit a layup and made his foul shot to cut the lead to 24-23, but went down in pain moments later after landing on a Butler player’s foot on rebound attempt. After several minutes motionless on the floor Milam was finally taken from the floor and straight to the locker room. He would not return to the game for the Wildcats. That left Matt Caudil to carry the load for the Wildcats, but he couldn’t hope to match four Bears in double-figures. Trevor Jenkins had 13 points and 8 rebounds, with Zeke Woodcock, Elijah Flener, and Jackson Washer each adding 11 as the Bears cruised to their third straight win by a final score of 59-47. Matt Caudil led all scorers in the second half with 14 points giving him a game-high 17 for the contest.