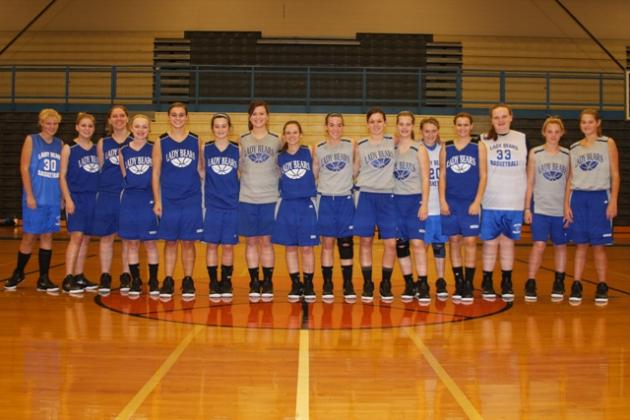 It’s tipoff time for the basketball teams at Butler County High School. The Bears and Lady Bears will see their seasons start this week and both teams will hit the hardwood this year with plenty of new faces and expectations for the upcoming season.

Coach Christy Clark will enter her third season as Lady Bears' head coach with plenty of returning firepower, but without several players from last year’s team that went 10-18 and made a trip to the Girl’s 3rd Region Tournament. All told Coach Clark lost 5 players from the 2010-11 Lady Bears squad, including three starters.

Even with several departures Coach Clark will return a strong set of core players from last year’s squad that now have the benefit of another year’s experience under their belts. Three of last year’s starters, guards Lynsie Clark and Madeline Drake and forward/center Katie Graham, are returning to the lineup this year. Shawna West also saw significant minutes as an eighth grader last season and returns to the team this year.

Rounding out the roster is a mix of returning players with little experience and new players from the upper classes. Kelsey Hughson, a freshman, will join the varsity squad this year after several years in the feeder programs and on the JV team. She will join basketball rookies -  freshman Allie Howard, and junior Danielle Hope to round out the high school players on the team that has no seniors.

Joining the group of returning players is a group of feisty, spirited youngsters from the 7th grade, 8th grade and freshman classes who are eager to prove they can play with their older teammates.

The Lady Bears tipoff their season at home on Monday night with a JV/Varsity doubleheader versus Hancock County.  The JV game will start at 6 p.m. with the varsity game to follow.

The Butler County Bears return most of last year’s squad that finished with a 12-14 record, but failed to make it out of the 12th District tournament. Coach Greg Woodcock was quick to point out that this year’s schedule is much tougher than last year’s. “We dropped Cloverport and Dawson Springs off the schedule this year. If we’re going to get better and compete with teams like Edmonson County and Grayson County we have to play a tougher schedule.”

Woodcock lost only one senior to graduation after last season, and returns a squad which now adds some eager sophomores that didn’t get to play as freshmen. They will join four returning starters from last year on a team that has many fans expecting a trip to the Third Regional Tournament this season.

A pair of highly touted, talented sophomores are expected to challenge for playing time this season. Drew Henderson and Jackson Washer saw limited action in 2010-11 but are determined to make their presence known this season. The duo, along with Woodcock and Jenkins, were the core of 7th and 8th grade teams that competed for state championships at that grade level. The foursome now looks to see if they can help the Bears take the next step and advance out of the 12th District tournament.

The Bears open their season on Tuesday night with a home JV/Varsity double header versus a strong Apollo High School team, one of the squads Coach Woodcock added to test his team and give them time versus tougher competition.

BCHS Varsity Bears and Lady Bears games will be broadcast live on Beech Tree Radio 1570 AM WLBQ, and can be streamed live on the internet at www.beechtreenews.com. Coverage will begin Monday night at 7:15 for the Lady Bears versus Hancock County.  Joe Morris and David Clark will share the bulk of the broadcasting with Diane Dyer, John Embry, and others filling in as needed.

"We're proud to be able to offer our readers/listeners the opportunity to listen to Butler County basketball on both the radio and via the internet through streaming on the BTN site," said BTN President Diane Dyer.  "We are grateful to our many sports sponsors whose generous support makes these broadcasts possible."