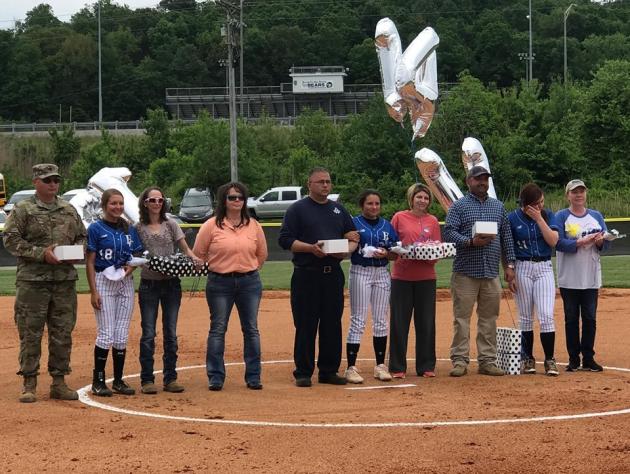 Duane plays 3rd base.  He is escorted by Tabetha and Duane Daniels.  Duane has played 4 years of Varsity Baseball.  His hobbies include hunting and fishing.  His plans are to attend SKYCTC for Industrial Maintenance, then to pursue a Mechanical Engineering Degree.  One of his favorite Bears memory is sumo wrestling on the beach during their Spring Break trip.  His funniest memory is getting yelled at in the dugout for talking in Hispanic accents.  His advice for future players is a saying from Coach Shockley, “Don’t think.”  To Duane, one of Coach Keith’s funniest moments is his “Meet the Muckdogs interview video on YouTube.”

Zach is a pitcher.  He is escorted by Andrea and Shawn Smith.  Zach has played 5 years of Varsity Baseball.  His hobbies are hanging with his friends.  He plans to attend WKU and get a degree in Criminology.  His favorite Bears memory is all the competitions during Hell Weekend.  The most embarrassing moment for him was the talent show on the Florida trip.  His advice for future players is to always give it your all and try your best.  Zach would like to thank Coach Keith for helping him whenever he needed it.

Weston is a 1st baseman.  He is escorted by Dionne and Jamison Merritt.  Weston has played 1 year of Varsity Baseball.  He also played football for 3 years.  His plans are to attend MacMurray College and further his football career and become an athletic trainer.  His favorite Bears memory is the stories that are told on the bus.  Weston’s funniest memory is Coach Shockley not being able to hit a pop up to the catcher during infield.  His advice for future players is “No Cap.”  Weston would like to thank Coach Proctor for having tough love, since Freshman year.

Dawson is an outfielder.  He is escorted by Holly Cropper and Adam Carroll.  Dawson has played 1 year of Varsity Baseball.  He also played football for 4 years.  His plans to attend SKYCTC and become a maintenance technician.  His favorite Bears memory is all the bus rides home.  His funniest moment is getting hit in the face with a ball on the first day of practice.  Dawson’s advice for future players is to give 110% on every pitch and take nothing for granted.  He would like to say thanks to all the coaches for giving him the opportunity to play as an inexperienced baseball player.

Coach Butler’s Speech for the Seniors

Dawson, Weston, Zach, and Duane I hope you all remember all the good times you had with your teammates and the few times of me not yelling.  You young men are a special group.  I couldn’t be more privileged to have coached you.  I pray that you all go on to succeed in all your future plans and much more. Dawson, I’m glad you decided to play this year.  From the years I’ve been coaching I haven’t had a player as much as you constantly ask me to work with them to help get better.  If you apply that drive after sports and school, you’ll have an amazing life.  Weston, I really wish I could have 20 of you every year.  The want to win and getting everyone up when they’re down is the best attribute anyone can have on a team.  I wish nothing but the best for you at MacMurray. Zach, I’m going to miss having the guaranteed strike thrower you’ve been every game you’ve pitched.  You have by far been one of the best pitchers I’ve coached.  The way you compete is what makes you an amazing pitcher.Duane, you’ve come a long way.  You worked amazingly hard this past off season and from that work is what made you a team captain.  I’m going to miss joking with you before/during and after every game.  I’m going to miss all of you.  If you ever need anything, just call or text.

Amber is being escorted by James and Angie Thacker and Barbie Embry.  She plays 2nd base.  Her best softball memory was all the lock-ins and dance offs.  Her advice to returning players is always remember to have fun and don’t take it for granted because it goes by faster than you think.  Amber plans to attend OCTCS to pursue a degree in nursing.

Dixie is being escorted by Arno and Nancy Garnier.  She plays right field and center field.  One of her best softball memories is winning the first round of region her Junior year.  Her advice to returning players is to be grateful for the long practices and late nights. Be grateful for a coach who cares too much rather than not at all.  Most importantly, be grateful to play Bears Softball.  She plans to attend WKU and pursue a degree to further her medical career.

Kylee is being escorted by Shawn and Andrea Smith.  She is a pitcher.  She could not pick just one of her best memories because there were too many to choose one.  Her advice for returning players is to live in the moment and never take anything for granted because time goes by way too fast.  Her plans are to attend WKU and pursue a degree in nursing.

Michelle is being escorted by Chris and Charity Flener.  She has participated in soccer for 8 years, track for 4 years, and cross country for 1 year.  Her school activities consist of Beta and FCA for 4 years, FBLA, Spanish Club, and Pep Club for 2 years, and Science Club, HOSA, and Yearbook for 1 year.  She plans to attend Lindsey Wilson College to play soccer and run track.  Her favorite memory is when Fuller ripped his pants, demonstrating a stretch and when she figured out, she and her coach both love desserts.

Hannah is being escorted by Jeff and Teresa Whittinghill.  She has participated in volleyball for 7 years, track for 2 years, and cross country for 1 year.  Her school activities are FCA, Pep Club, and Beta Club.  She plans to attend college and study early childhood development.  Her favorite memory was when the track flooded while they were at state last year.  They had to drive back a second day.  Their coach got them ice cream after.

Michael is being escorted by Michael Elmore and Rae Anna Kirby.  He has participated in football for 4 years, track for 3 years, and archery for 2 years.  His school activities include NJROTC and Science Club.  His plans are to join the Army to become a Pilot of Helicopters.  His favorite memory is beating Kain in the one mile.

Kain is being escorted by Chris and Tawnya Neighbors.  He has participated in football and track for 4 years.  His school activities are NJROTC for 4 years and Skills USA for 1 year.  He plans to leave in June for Marine Corps Bootcamp and plans to retire from the Marines.  His favorite memory is Michael faceplanting on the hurdles.