BCHS holds commencement for Class of 2012 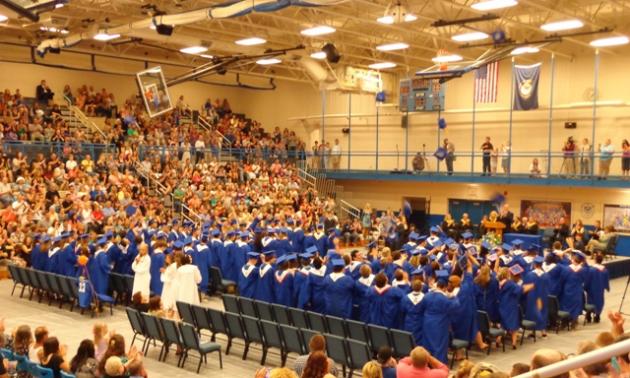 The Butler County High School gym was packed as friends and family members of the Class of 2012 gathered to watch their loved ones graduate. One hundred thirty-eight (138) graduates proudly crossed the stage and received their diplomas along with a handshake with Superintendent Scott Howard. Members of the Class of 2012 also took time to remember fallen classmate Raven Durbin; Durbin passed away in March after battling leukemia.

After students marched in to "Pomp and Circumstance" played by Mr. Dockery, BCHS Principal Patrick O'Driscoll welcomed those in attendance. The Senior Choir then performed the National Anthem and the NJROTC presented the colors. Senior Clay Embry said the invocation. The Senior Choir then performed "It's So Hard To Say Goodbye To Yesterday" and "Alma Mater." O'Driscoll then presented awards and recognized members of the Senior class for their accomplishments during their time at BCHS.

In his speech, Arnold told his fellow classmates, "It hit me, I wouldnt be back to high school in August . . . I felt a sense of freedom; freedom to choose where I go in life."

Students Kassidy Cardwell, Chelsea Deel, and Tessa Hudson then performed "My Wish" for their classmates.

Senior Class Counselor Duane Curry called out the names of each graduate and Howard awarded each student with their diploma. Mr. Curry pointed out that the Class of 2012 received $1,291,549 in scholarship money, the highest number that students from BCHS have ever received. Families and friends of the graduates cheered as their student crossed the stage.

Raven Durbin's parents accepted her diploma from Howard with a standing ovation from the crowd as well.

After each diploma had been awarded, the Senior were given a moment to congratulate each other before the ceremony ended. Mr. Dockery played "Free Bird" on the piano while the graduates shared laughs, hugs, and even tears.

O'Driscoll closed out the ceremony by presenting the Class of 2012. Caps flew through the air and the air filled with cheers immediately. Congratulations to the BCHS Class of 2012!