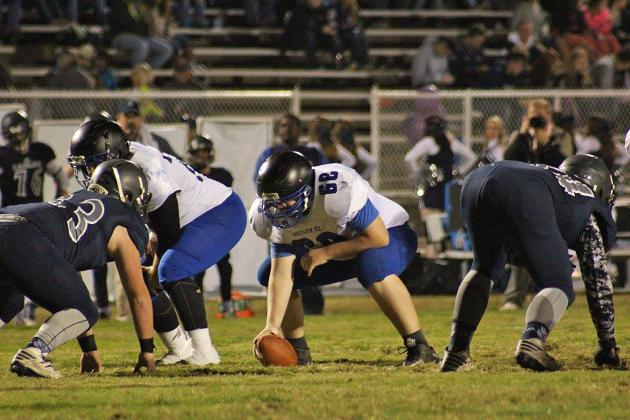 Eagles can fly but they weren’t able to get off the ground on Friday night, October 28, as the Butler County Bears came away with an impressive 48-7 road win against Ohio County.

The victory caps a four-game winning streak for the Bears and brings to a close the regular season with Butler County posting a 7-3 record.  The Bears, on Friday, November 4, will host Ballard Memorial in the first round the Kentucky High School Athletic Association’s state playoffs.  Kickoff is set for 7:30 p.m.

After suffering a tight 42-28 loss to Owensboro Catholic on September, the Bears rallied and finished the year strong with wins at Hancock County (41-0 on September 30), at home against McLean County (44-32 on October 14), and on the road at Todd County Central (56-26 on October 21).

In its final game of the 2016 regular season, the Bears scored two touchdowns in the first quarter to take a 14-7 lead.  Quarterback Rex Henderson ran from 7-yards out and 5-yards out for the scores.  Logan Richardson’s point-after kick was blocked after the first touchdown but Henderson passed to receiver Daltyn Havens after the second one for the two-point conversion.

Butler County’s air attack took flight during the second quarter as the Bears scored three touchdowns:  Henderson to receiver Brendan Shanklin from 11 yards out and Henderson to receiver Gage Ward for a 46-yard touchdown.  Henderson also scored on a 57-yard run.  Logan Richardson was spot-on with three good point-after kicks.  The Bears led 35-7 at the half.

Already in control of the game, two more Butler County touchdowns in the third quarter put the game completely out of reach for the Eagles.  Henderson connected with Gage Ward again for a 59-yard touchdown (conversion attempt failed) and Henderson found receiver Blake Graham for a 16-yard touchdown; Richardson’s kick was good to give the Bears their final margin of victory at 48-7.

Butler County’s Rex Henderson (10-19, four touchdowns) had 194 passing yards and the team had 249 rushing yards of offense.  Henderson rushed for 133 yards and Houston Hampton had 103 yards on the ground to lead the Bears.

Gage Ward and Blake Graham led the receiving corps with 117 and 38 yards, respectively.

The Bears had 21 first downs; Ohio County had 13.  The Eagled turned the ball over four times (interceptions) and Butler County had one turnover – also an interception.

Butler County (7-3) will face Ballard Memorial (5-5) on Friday, November 4, at home in the first round of the playoffs.  The Bears defeated Ballard last year 42-21 before falling in the second round to perennial football powerhouse Mayfield, who went on to win a Class 2A State Championship.  Kickoff will be at 7:30 p.m. - thirty minutes later than usual to allow for travel distances.  The game will be aired live on WLBQ 101.5 with John Embry, Cody Donaldson, and Josh Scott/Jeremy Davis.

All stats above are unofficial.  Official stats will be posted with the K.H.S.A.A. on Tuesday, November 1.

Photos by Jeremy Hack from the 2016 Season