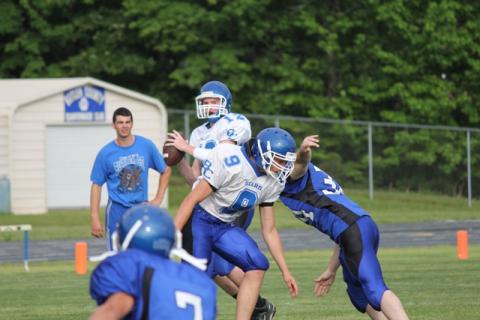 Fans made their way to see the annual Butler County High School blue/ white football game on Thursday evening, May 3. Head coach Ryan Emmick explained, “This is an opportunity for these players to showcase their hard work during spring practice. This also gives the coaching staff an indication of what needs to be focused on before the season begins in August.”

Emmick went on to say, “We have two very capable quarterbacks this year in Zeke Woodcock and Elijah Flener. This game allows both young men to run and become familiar with the offense.”

Flener, scrambling out of the pocket

At halftime, both teams were scoreless. Assistant coach Barry Frazier commented, “That if the blue team was going to score they would have to run the ball in the middle to create more options in the passing game.”

Both teams made the adjustments they needed during the break and were able to produce points early in the second half. The blue team held on to win at the end with a score of 12-6.