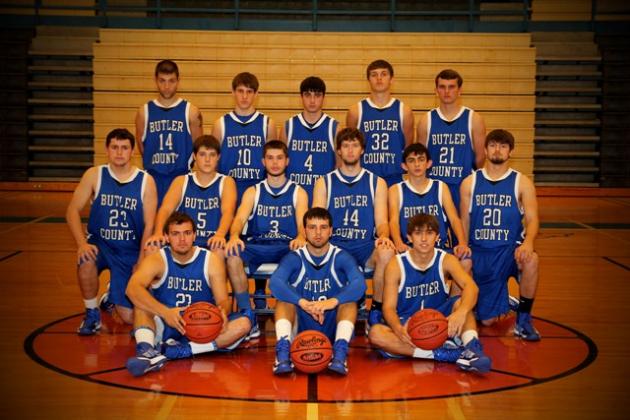 When the Butler County Bears hit the court on Monday night to start the 2012-13 season there will be a new head coach on the sidelines, and a new emphasis for the team.

According to first-year head coach Calvin Dockery this edition of the Bears will concentrate on defense. Dockery said, “It’s what I want to be our calling card.”

Dockery inherited a team that went 11-20 in 2011-12, including a 7-3 district record and a trip to the 3rd Region Tournament where the Bears were ousted in the first round by the Green Wave of Meade County. That team was built on offense, but Dockery said his team has bought in to his ‘defense first’ scheme. “It’s not really what they’ve been used to,” said the coach. He continued, “they know if they can get some steals and create some chaos up top that we’ll get some easy baskets out of that.”

Butler County will show multiple defensive looks and schemes this season. Dockery said that the Bears will play a mix of both man-to-man and zone and will switch between the two. Defense is crucial to his up-tempo offense which relies on fast breaks and the transition game. Dockery said that in particular Rex Henderson, Zach Burden, and Brandon Thomas had bought into his new defensive emphasis.

On offense Dockery knew he had weapons at his disposal. Returning from last year’s team are potent scorers including  Elijah Flener, Zeke  Woodcock, and Trevor Jenkins. However Dockery was pleasantly surprised at some of his other players. Dockery said that senior Alex Hudnall has shown a sharp outside shooting eye so far in practice, and reported that Brandon Thomas has also had a strong autumn slashing and getting to the basket.

Dockery says the question of who will be the ‘go-to’ guy will be answered as the season unfolds, and will depend much on the game situation. He pointed out that senior Elijah Flener is a natural leader that can take a big shot, but was quick to add that both Woodcock and Jenkins were strong in key situations.

Depth doesn’t look to be a problem for this Bears team. Dockery thinks his team can go nine to ten players deep with the opportunity for players to step up and earn minutes on the court.

The Bears will play in a district with a decidedly new look. The 12th District will feature new coaches at Butler County, Grayson County, and Whitesville Trinity, with only Edmonson County returning their previous head coach. Grayson County, the team to beat in recent years, will start the season with two key players from last year’s team playing for a different school. Trey and Ryne Tinsley transferred in the off-season, taking a large portion of the Cougar scoring with them. Dockery thinks this sets up well for BCHS to make a run at the District Championship and a return to the 3rd Region Tourney.  Again, Dockery says the key is defensive play, and that if the team defends, “we have a really good shot at winning this thing.”