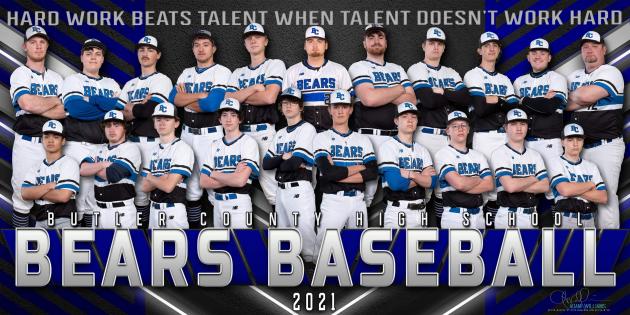 OWENSBORO - Butler County fell behind early and couldn't battle back as host Owensboro Catholic pulled away to win 16-1 in three innings in a high school baseball game on Thursday, May 27.

Owensboro Catholic outhit the Bears 8-1 and fared well in the field, committing only one error.

Sam McFarland earned the win on the mound for the Aces, pitching a one-hitter.

Kolton Hudson took the pitching loss for the Bears.

Contributing at the plate for Owensboro Catholic, Luke Evans drilled a double.

HARTFORD - Butler County fell short as Ohio County held on to win 2-1 in a high school baseball game on Tuesday, May 25.

Ashton Farris pitched a complete game and earned the win on the mound for the Eagles. Farris surrendered one run on seven hits over seven innings, striking out three and walking zero.

Will Embry suffered the pitching loss for the Bears. Embry allowed one run on one hit over two innings, walking one.

Jake McKee started the game on the mound for visiting Butler County. McKee pitched three innings, allowing one run on two hits while striking out three.

Matthew Smith drove in one run for the Eagles.

The Bears lost despite outhitting the Eagles 7-3.

Embry and Jordan McCrady paced the Bears at the plate, providing two hits apiece. Delivering in a key offensive category for Butler County, Embry drove in the Bears' lone run.

HARDINSBURG - Visiting Butler County was limited at the plate as Breckinridge County pulled away to win 10-0 in five innings in a high school baseball game on Monday, May 24.

Breaking open a scoreless game, Breckinridge County erupted for five runs in the bottom half of the second inning.

Eli Lewis took the pitching loss for Butler County. Lewis surrendered 10 runs on nine hits over four and a third innings while striking out two.