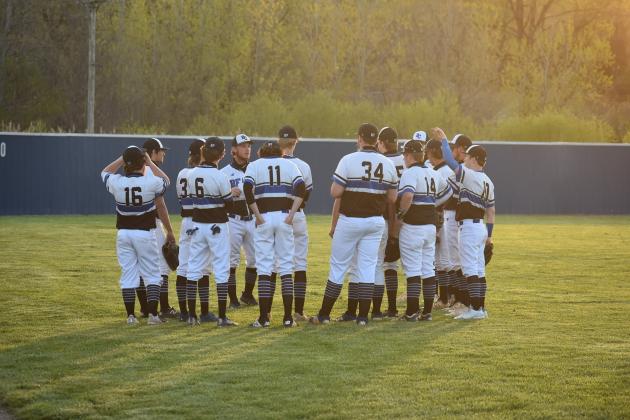 Butler County scored first and never trailed. The Bears led 6-0 before Whitesville Trinity plated its first run in the bottom half of the fifth inning.

Will Embry earned the win on the mound for the Bears. Embry surrendered one run on two hits over five innings, striking out six.

Eli Lewis and Justin Castlen each pitched out of relief roles for visiting Butler County.

Landon Huff took the pitching loss for Whitesville Trinity. Huff surrendered six runs on 10 hits over six innings, striking out 12 and walking one.

Defensively, each team committed one error.

FRANKLIN - Butler County was held scoreless over the final six innings as homestanding Franklin-Simpson pulled away to win 6-2 in a high school baseball game on Friday, April 23.

Ben Banton picked up the win on the mound for Franklin-Simpson. Banton pitched four innings, allowing two hits and zero runs while striking out four and walking one.

Dalton Fiveash started the game on the mound for the Wildcats. Fiveash pitched three innings, allowing two runs on one hit while striking out eight and walking zero.

Eli Lewis started the game on the mound for the Bears. Lewis allowed two hits and two runs over three innings, striking out three.

Franklin-Simpson outhit Butler County 5-3 and committed only one error.

Cole Wix led Franklin-Simpson at the plate, delivering two hits in four at-bats for the Wildcats.

Carter Graham, Leevi McMillin and Jake McKee provided one hit apiece for the Bears in the setback.

MORGANTOWN - Butler County was limited at the plate as visiting Edmonson County pulled away to win 6-2 in a 12th District baseball game on Tuesday, April 20.

Edmonson County plated three runs in the top half of the first inning and never trailed. The Wildcats led 6-0 before Butler County scored its first run in the bottom half of the third inning.

Chaz Wilson was credited with the win on the mound for Edmonson County. Wilson surrendered two runs on four hits over six and two-thirds innings, striking out nine.

Closing out the game on the mound for the Wildcats, Hunter Wilson pitched one-third of an inning in relief.

Jordan McCrady suffered the loss on the mound for the Bears. McCrady surrendered six runs on two hits over two innings, striking out three and walking zero.

Kolton Hudson went 2-for-3 at the plate to lead the Bears.