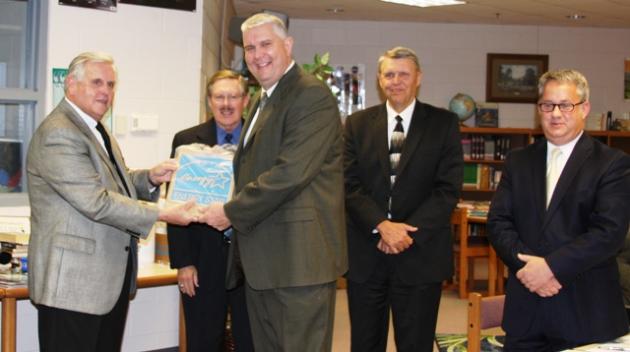 Tuesday night’s Butler County Board of Education meeting had a very special guest, several visitors, and a distinguish honor for the district.  Kentucky’s Commissioner of Education, Terry Holliday, Ph.D., was on hand as Morgantown Elementary received an Energy Star Award.  MES was the fourth and final school in the district to receive the award, thus making Butler County School District the first district in the state of Kentucky to achieve 100% Energy Star Status.

According to Greg Guess, Director of Efficiency and Conservation for the Kentucky Department of Energy, the 100% Energy Star Status means a healthier learning environment, a savings in money, and a smaller carbon foot print.

The process to make Butler County Schools more energy efficient began in 2004 under former Superintendent Woods and the Board of Education.  Former board members Gary Southerland and Mike Martin were also in attendance on Tuesday night.
According to Superintendent Scott Howard, the Energy Star program has saved the district a half a million dollars over the last seven years.

“What we save goes back to the students,” said Howard.

Jimmy Arnold, the energy manager for the district, was also honored on Tuesday night.  He recently became a Certified Energy Manager. Arnold is the  front-line manager responsible for coordinating energy efficiency and sustainability programs in the district.
“Jimmy does an outstanding job for the district,” said Howard.
Arnold, however, was quick to praise the faculty and staff of each school for their hard work and dedication to the program.
Each school was presented with a bronze plague honoring their achievement.

Submitted by Amy Smith-Thomas (not verified) on Fri, 11/11/2011 - 7:03am
Congrats and great job Jimmy Arnold!!! BC has great schools, administrators, staff, and students.