BC Courthouse lawn has long history of remembering veterans 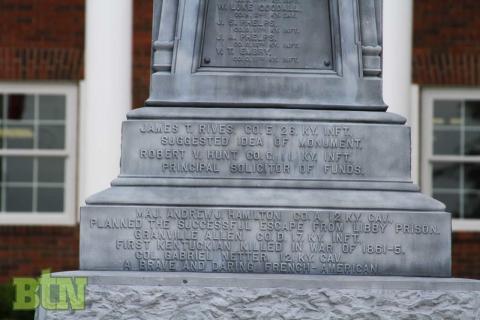 Ground was broken on Monday, August 5th for another remembrance of Butler County veterans. Joining the Civil War statue and the existing War Memorial will be a Veteran's Wall of Honor on the lawn of the Butler County courthouse.

The Wall of Honor project was conceived by the Ladies Auxiliary last year. Existing memorial bricks in the courthouse lawn have become damaged and have degraded over the years, prompting the Ladies Auxiliary to come up with a way to salvage the existing bricks, and come up with a way to incorporate the bricks into a new memorial. The Ladies Auxiliary decided on a memorial Wall of Honor last year and had the idea approved by the Butler County Fiscal Court. The Court also agreed to fund repair of the Civil War Memorial statue in front of the courthouse. That work consisted of repairs to the base of the statue, and the installation of a new marble base for the statue. Unique Granite and Marble, from Owensboro, will complete the sealing and restoration of the statue's base and install the marble slab.

This is just the latest chapter in the story of the courthouse memorial, dating back to just after the turn of the 20th century.

Minutes from the February, 1907 Fiscal Court meeting show that the first obstacle to erecting the statue was a large tree on the courthouse lawn near the proposed site of the memorial. J.T. Rives was given permission to cut the tree for the project.

While the statue was primarily meant to honor Civil War dead from both the Union, and Confederate armies, space was also given to list the fallen from the War of 1812. Most viewers assume the soldier on the statue is from the Civil War era, but the uniform and equipment of the soldier is actually that of a soldier in the War of 1812. The dress of the soldier isn't the only thing that sets Butler County's Civil War memorial apart from the many hundreds of others across America. The Butler County statue was deliberately faced west, instead of north or south. It's was done to show no favoritism toward either side in the Civil War, and to represent Kentucky's place in the history of the Civil War as a border state.

The current refurbishing is just the latest in a series of upgrades to the statue.

In 1996 the Fiscal Court approved a bid from Precision Technologies, Inc for $11,435 for a complete refurbishment of the statue. When workers from PTI disassembled the statue an extra panel was found in the statue's base. The seal features an old style Kentucky State seal, and lists "Main Battles: Chickamauga, Corinth, Nashville, Shiloh, and Stone River."

The 1996 refurbishment was spearheaded by Carlton Drake and the Butler County Historical and Genealogical Society. Rededication of the monument was originally scheduled for Memorial Day 1996, but was rescheduled because of heavy rains. The ceremony was conducted as part of Flag Day commemorations held on Saturday, June 15th, 1996.

As a part of the commemoration high school history and civics teacher Steve Fuller gave a speech, followed by the placing of a time capsule in the statue's base by members of the Historical and Genealogical Society. On hand to place the capsule were; Carlton Drake, promoter of the restoration project, Ray Paul Deweese, President of the Historical and Genealogical Society, Mary C. Elder, representing the Morgantown Elementary fund drive for the project, Joe and Eva Forsythe, board members of the society, and Steve Fuller, guest speaker at the event.

Ray Paul Deweese spoke about the meaning and intent of the time capsule. Said Deweese, "A time capsule is meant to convey to generations to come the people, events, customs, news of the county's activities in our time, and a bit of history of our great county of Butler."

The time capsule included tapes of various veterans programs aired by WLBQ radio, volumes 1, 2, and 3 of the Butler County History books, a 1995/96 South Central Bell phone book, the then-current issue of TV Guide Magazine, a list of all the names on the memorial, a list of names of Desert Storm veterans, a 1996 US Mint proof set provided by Morgantown Bank and Trust, photos of the restoration, and other items.

The Confederate-Union Veterans' Monument in Morgantown is beleived to be one of only two monuments in the country to honor both Union and Confederate soldiers.