BC Bears Softball Rebuilding in 2012 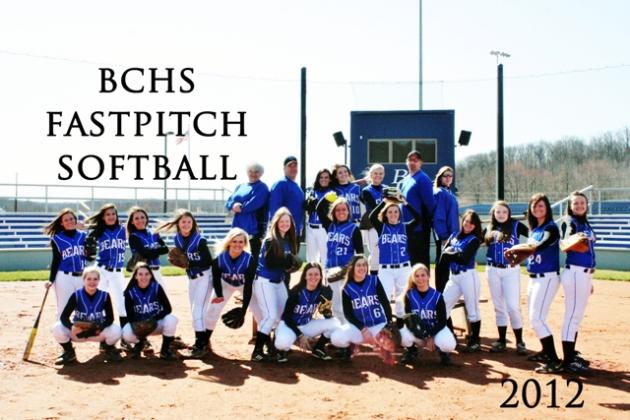 The Butler County Bears softball team - 2012 edition - is optimistic about its upcoming season despite losing three starters to graduation, as well battling the injury bug during the preseason.

Gone in 2012 are first baseman Taylor Manning, centerfielder speedster Lindsey Blair, and three-time All-State pitcher and current Murray State player CheyAnne Gaskey.  But, this is not a team that is savoring its past success but rather is focused squarely on the future.

"We were hit pretty hard with graduation losses but our returning players have definitely stepped up in their preparation for this season and I think that effort and attitude will pay off as our season progresses," said BCHS head coach John Embry.

Junior pitcher Morgan Manning is expected to get the majority of starts in the circle, though freshman Kassie Phelps and sophomore Natoshia White will also be asked to log some varsity innings.  With an extensive off season training program, Manning has added velocity to her fastball, tremendously improved her change-up, increased overall command of pitch location, and added a nice curve.  Phelps and White have also shown similar improvements in their pitching repertoire.

Phelps is also a utility player who can fill in both in the outfield and in the infield at various locations.  She will likely play a lot of third base due to the injury of Lynsie Clark earlier this year.  Clark, one of the team's top offensive threats, is not expected to return until mid-April.  A power hitter, White is the starting varsity second baseman.

Rounding out the battery is varsity catcher Amy Rogers, a sophomore.  With a strong arm and solid bat, Rogers will fill key roles both offensively and defensively.  Junior Candace Ibarra and Allie Howard are back-up catchers, as well as outfield prospects.

Junior Madeline Drake, one of the top hitters on last year's team, anchors the infield at the shortstop position.  Drake has been hampered by a sore hamstring during preseason but looks to be ready to go as the season gets underway.

Sophomore Katie Graham is the likely varsity first baseman.  A solid all-around athlete, Graham's bat is catching up with her strong defensive skills on the corner.

Freshmen Emily Rich, Sally Hunt, and newcomer Sarah Johnson will see significant playing time at the junior varsity level - Rich and Johnson most likely in the outfield and Hunt in the infield.

Butler County stepped up its off season and pre-season training in preparation of the 2012 season, according to Coach Embry.

"We had most of our returning players playing summer travel ball and taking individual instruction, as well as taking part in our three-day per week pre-season program which began in October, and numerous open cage opportunities throughout the winter," said Embry.   "This is the level of commitment our players need in order to be successful."

Serving as team captains for the 2012 season are Payton Grubb, Jazmin Reynolds, and Morgan Manning.

"This is arguably the toughest schedule we've ever played," said Embry.  "But, I've always bought into the belief that to be the best you've got to play the best and that's exactly what we're doing.  It's not always about the wins and losses during the regular season."

Butler County is coming off back-to-back 12th District Championships and Third Region Runners-up.  Coach Embry thinks this team is capable of reaching and even surpassing those accomplishments.

Stay connected to Beech Tree News and Beech Tree Radio for the latest softball news. Listed below are the roster and complete schedule for the Bears Softball team.

*Home games are in bold