BC 8U All Stars take 2nd in WKY Aces Tourney 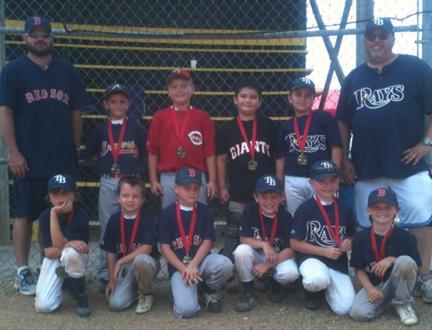 The Butler County 8U All-star team traveled to Auburn, Ky to play in the Western Kentucky Aces tournament last weekend. The boys kicked-off pool play Friday night playing games back to back. BC picked up a gutsy 10 inning win (14-13) against the WKY Aces 7U team.  The team was fired up and ready for the next game, winning 16-0 in 4 innings against Allen County-Scottsville.

After the 2 great games Friday; Saturday started the single elimination tournament and BC was set to face Russellville’s All-star team. BC was down most of the first game Saturday, but in the 6th inning final at bat, a walk off hit pushed the team to another win  and put them into the championship game against the Henderson, KY River Bats.  Butler Co. trailed throughout most of the game but never gave up.  The Butler Co. 8U All-Stars would fall to the River Bats 17-6 to become Runners-up of the Western Kentucky Aces tournament.

After the game, head coach Robert Johnson said, “We have only had 3 practices and placed 2nd against a great team.  We will keep getting better and better.  I am very, very proud of our boys.”