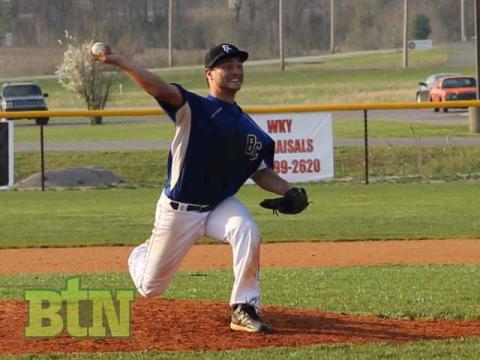 The BCHS Bears baseball team has seen action in two varsity and one junior varsity games this week.  On Monday night the Bears had a home varsity game against Muhlenberg County losing 7-0, and played district foe Whitesville-Trinity on Tuesday night, winning big 11-1 in 6 innings in the varsity game, and 5-4 in the JV game.

Monday night’s game against Muhlenberg marked the first time the two teams have met this season.  After heavy storms that came through around 5:00, the Bears were able to get the soggy field ready to play by 6:30, delaying the 5:30 scheduled game.  Because of this delay, the JV game following the varsity game was canceled.

After BCHS pitcher Caleb Hunt held Muhlenberg scoreless in the top of the first the Bears started off hot at the plate, loading the bases with only one out. However, they were unable to come up with a hit, leaving all three men stranded.  After a good first inning, BCHS was unable to string anything else together for the next six innings, being shutout.  Keston Flener led at the plate with 2 hits, while Cole Tynes and Blake Graham each picked up one hit.

Caleb Hunt pitched 6 2/3 innings, giving up 6 earned runs off of 7 hits.  Hunt struck out 7 batters on the night.  After getting into trouble in the 7th inning, Hunt was relieved by Blake Graham who struck out one of the two batters he faced.  Muhlenberg proved to be too much for the Bears, picking up the 7-0 victory.  The two teams will face off again on May 15.

Tuesday night the Bears hoped to rebound, facing district rival Whitesville-Trinity High School in varsity/junior varsity doubleheader.  The offense seemed to wake-up after being asleep on Monday night.  BCHS pushed across 11 runs in a run-rule shortened 6-inning game.  The Bears had 11 hits with Blake Graham, Caleb Deweese, and Dillen White all having multiple hits.  Graham led the way with 3 hits on the night and White had 2 triples and 5 RBI’s.

In addition to his work at the plate, White also threw a complete game only allowing one unearned run to cross the plate, and striking out 7.  White only threw 69 pitches in his six innings of work.

The BCHS JV team also picked up a 5-4 victory on Tuesday night.  Brandon Jones threw all five innings in the match-up.  The win marked the third in a row for the Bears JV.

“I was proud how we came out and played tonight after a hard loss on Monday.  Every district game is huge and we have rose to the occasion the last two, beating Edmonson and Whitesville,” said BCHS head coach Kevin Winn.

The Bears varsity has been victorious 4 out of their last 6 games and has moved to 2-1 in the district.

Saturday the Bears varsity will be back in action on senior day against Ohio County.  The first pitched is scheduled to be thrown at 2:00.  Ceremonies will be held for the seniors immediately following the first game.