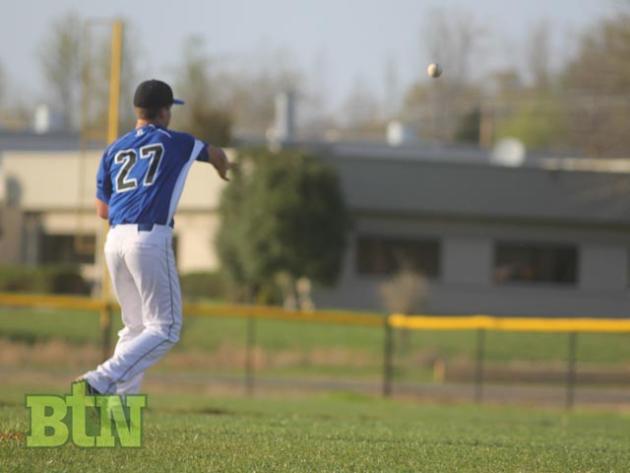 On Tuesday night the BCHS Bears baseball team hosted the Edmonson County Wildcats (10-11) for a district varsity/junior varsity double header.  This marked the first time the two teams have met this season, and the first home district game for the Bears this year.  BCHS was able to provide a clean sweep of the Wildcats, winning the varsity game 8-6, and the JV game 5-4 in exciting fashion.

After a rain out against Logan County on Saturday, the Bears were ready to get back in action for the first time since Thursday.  Sophomore southpaw Caleb Hunt was the starting pitcher for BCHS, making his seventh start of the year.  Hunt’s outing lasted 3 1/3 innings allowing 2 earned runs off of 6 hits.  The Bears jumped out to an early lead, but a Wildcat rally early in the 4th inning brought them within one. Senior right-hander Dillen White was brought in to replace Hunt to try to slow the Wildcat surge.  White was able to end the inning, not allowing any of his own runs to cross the plate with the game being tied 5-5 at the end of four.  The Bears offense was able to respond to the Edmonson surge and put up 3 more runs on the board in the 6th inning, making the score 8-5.  After an unearned run crossed the plate in the top of the 7th, making the score 8-6, BCHS was able to get the third and final out of the game, giving them the 8-6 victory.

The Bears offense exploded on the night with 10 hits, with 3 of them being doubles.  Cole Tynes, Keston Flener, and Caleb Deweese each had 2 hits on the evening.

The 5 inning JV game following the varsity win proved to be just as an exciting match-up.  Blake Graham made his first start on the mound of the year, throwing all 5 innings.  After a throwing error that would have been the final out of the game, Edmonson put up 3 runs, making the score 4-2.  The Bears answered the Wildcats in the bottom half of the inning and tied the game up 4-4 with 2 outs.  With two outs and runners on first and second, Brandon Jones squared up a line-drive single to right field, giving the Bears the walk-off win 5-4.

The Bears were rained out of their game Thursday night against the Glasgow Scotties, but the Bears will host Caverna on Friday night with the first pitch being thrown at 5:00.