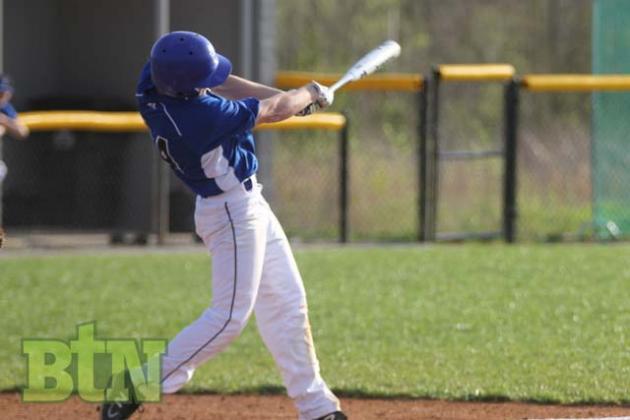 Over the past week the BCHS Bears baseball team saw action in 3 district games, finishing out their regular season district schedule.  Coming into the start of the week, the Bears were 2-1 in district with wins over Edmonson County, and Whitesville-Trinity, and one loss to Grayson County.  The Bears finished the week going 1-2 with a 2-1 loss to Grayson, a 10-3 loss to Edmonson and a 15-0 blowout win over Whitesville.

While rain clouds loomed all afternoon, the storms held off last Monday night and allowed BCHS to play their scheduled varsity game against district foe, Grayson County.  Coming into the game, Grayson was 5-0 in district and 20-7 overall.  With Senior pitcher Dillen White leading the way on the mound, the Bears came out prepared and ready to fight. White threw a complete game, only throwing 86 pitches over his 7 innings of work.  He allowed 2 earned runs, walked 2, and struck out 5.

The offense had a tough time stringing hits together and was only able to give White 1 run of support at the plate.  Carrington Harpe had 3 of the Bears 5 hits, with the other two coming from Steven White and Keston Flener.  In the 7th inning the Bears had runners at first and second with one out.  Steven White lined a singled to center field.  Base runner Caleb Hunt rounded third and headed home to score the tying run.  It was a “bang-bang” play at the plate with Hunt being called out.  The next batter was unable to get on bases and the Bears suffered a loss of 2-1.

The JV game was shortened to 2 innings due to heavy rain that moved in.  8th Grader Drew Clark pitched for the Bears.

The next scheduled game against Edmonson was rained out on Tuesday and rescheduled for Wednesday.  The weather improved Wednesday and the Bears were able to play a varsity/junior varsity match-up.  The offense for BCHS still appeared to be asleep.  The Bears only recorded 4 hits on the afternoon, with a double by third baseman Blake Graham.

Two left-handers saw time on the mound for BCHS.  Sophomore Caleb Hunt started the game for the Bears.  After getting into trouble in the 4th inning, senior Steven White came in to relieve Hunt.  Despite the change in pitchers, the Edmonson bats still stayed hot.  As a unit, BCHS pitchers allowed 8 earned and 2 unearned runs off of 12 hits.  Hunt and White each walked 1 batter on the night.  The final score was Edmonson County 10, and BCHS 3.

In the JV match-up following the varsity contest, the Bears fared much better.  They were able to pickup the win in the 5-inning game.  Brandon Jones was the wining pitcher for BCHS.

On Friday night the Bears traveled to Whitesville-Trinity to take on the Raiders.  This marked the second time the two teams have met this year, and the final district game for BCHS. In their first match-up, BCHS took the 11-1 victory.  The Bears seemed to pick up right where they left off last time they played the Raiders.  BCHS scored 15 runs in the 5-inning run-rule game.  Over 5 innings, 9 Bears hitters collected hits with 3 hitters having multiple hits.  Caleb Hunt was a perfect 3-3 on the night with two doubles.  Brandon Jones made his first varsity start on the year and had 2 hits. Blake Graham continued to stay hot with 2 hits.

Dillen White threw his second complete game of the week.  White only threw 80 pitches while striking out 8, and only allowing 2 hits.  White also did not walk any Raiders hitters.  The victory proved to be White’s 5th win of the season and lowered his ERA to a team leading 3.14.

In the JV match-up, the Bears won 13-1 in a 3-inning run-rule game.  Blake Graham threw all three innings, only allowing 1 run to cross the plate.  The win marked the 4th in a row for the Bears JV and helped them move to 6-5 on the year.

The game scheduled for Monday night against Logan County was rained out and is rescheduled for Thursday, May 17 at Logan County at 5:30.  On Tuesday night BCHS will the travel to Muhlenburg County for a 5:30 game, and will play at 11:00 on Saturday against Allen County-Scottsville at Hot Rods Stadium in Bowling Green.