Ballot set for May 16 primary election in Kentucky 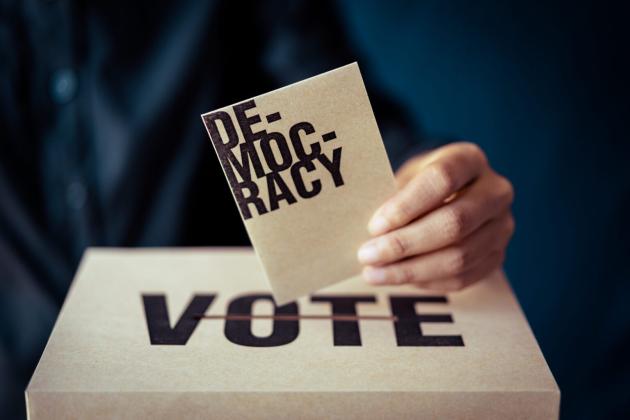 Republicans will have competitive primaries for five of six statewide offices

FRANKFORT — Republican Secretary of State Michael Adams closed the door to the elections office at 4 p.m. Friday, signaling an end for candidates to file for Kentucky’s 2023 elections.

No big surprises emerged in the 12-candidate Republican race for governor, although former Republican Gov. Matt Bevin created some suspense by hinting on Twitter that he would run and announcing an appearance in the Capitol Rotunda, where he lectured the assembled media before leaving without filing for office.

Republicans will have competitive primaries for five of the six constitutional offices.

Two Republicans filed to run against Adams, who is seeking a second term.

Knipper previously ran for secretary of state in 2019.  After filing, he was fired by former Gov. Matt Bevin administration. On Friday, Knipper was joined at the Capitol by Sen. Adrienne Southworth, R-Lawrenceburg, another Hampton staffer who was fired by Bevin’s chief of staff.  Knipper and Southworth were part of a controversial “Restore Election Integrity” group that toured the state.

Maricle, who is from Lebanon Junction, was in the House of Representatives in the late 1990s. He filed  on Dec. 29.

Wheatley, a former member of the House of Representatives from Covington, lost his reelection bid to current Republican Rep. Stephanie Dietz in 2022. When he filed to run last month, the Kentucky Democratic Party said in a statement that Wheatley’s plan for the office included extending the early voting period to two weeks and eliminating straight party voting.

Adams, who during his tenure in office has helped expand early voting, removed deceased voters from rolls and supported photo ID requirements for voting, filed to run on Dec. 27.  On Facebook, Adams’ campaign said,  “We cannot let a demagogue win this office — the stakes are too high.”

Here’s how other constitutional officers’ races are shaping up:

Republican State Treasurer Allison Ball is seeking to become the next auditor of public accounts. Derek Petteys, of Lexington, is challenging her in the primary.

On the Democratic side, Kimberley “Kim” Reeder, of Frankfort, a tax attorney and teacher who grew up in Rowan County, is running.

Two Democrats are seeking a chance to become commissioner of agriculture: Sierra Enslow, of Hodgenville, an economic development advisor, and Mikael Malone, Winchester.

Quarles has served the maximum two terms and is running for governor.

Russell Coleman, former U.S. attorney for the Western District of Kentucky, is the only Republican seeking to succeed Daniel Cameron, who after one term as AG is running for governor. Coleman also served as general counsel to U.S. Sen. Mitch McConnell.

Coleman will face State Rep. Pamela Stevenson, of Louisville, an attorney, Baptist minister and retired Air Force colonel, and the only Democrat seeking the office.

O.C. “OJ” Oleka, of Frankfort, serves on Treasurer Allison Ball’s staff. The son of Nigerian immigrants, Oleka was formerly president of the Association of Independent Kentucky Colleges and Universities.

Mark H. Metcalf, of Lancaster, filed to run for the office Friday. He is Garrard County Attorney.

Democrat Michael Bowman, of Louisville, the 2019 nominee who lost to Ball, has also filed to run again. Since then, he worked for the Beshear administration on education and workforce development.

You can read a list of all 15 candidates for governor here.

In a statement the Republican Party of Kentucky spokesman Sean Southard said the GOP “has an embarrassment of riches when it comes to candidates who have filed for the 2023 constitutional officer races. We look forward to watching the primary process unfold and electing Republican candidates to all our constitutional offices once the nomination process concludes in May. We especially look forward to electing a Republican governor who will work with our supermajorities in the General Assembly to deliver for Kentucky’s families, workers, and small businesses.”

The Lantern did not receive a statement from the Kentucky Democratic Party.

This story has been updated to include another state treasurer candidate and include more information.