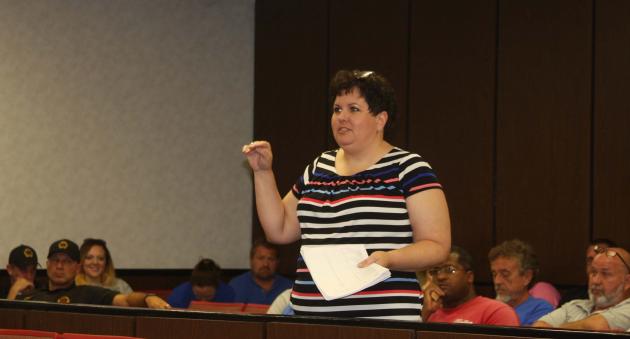 Judge-Executive David Fields presented the Executive Order for the Special Election to be held on September 27, 2016, for the sale of alcohol in Morgantown, Woodbury, and Rochester city limits.
Butler County Clerk Sherry Johnson explained that she had requested the ballots and asked for the Woodbury precinct to be moved from Butler County High School so schools would not have to be dismissed that day.

"If a new location is approved, we will mail every registered voter a notice," said Johnson. "Only registered voters living in the city limits of Rochester, Woodbury, and Morgantown are allowed to vote in the Special Election."

Roger Givens addressed the court wanting the ramp below Woodbury Dam on the Green River Museum side to be cleaned off.  The county owns the property and approved his request.

Green River Equipment Leasing, Inc. was awarded the bid for the Leonard Oak Boat Ramps at the total cost of $125,312.50. The county received a grant for a portion of this expense.

The court spent over 50 minutes discussing the fire dues ordinance.  Butler County Attorney Dick Deye presented five considerations to the court regarding the ordinance:
1. Setting the Sheriff's fee at 4.25%
2. Setting the PVA fee at 1%
3. Unlike taxes, no discounts will be deducted for early payment of fire dues
4. Penalties will be assessed at the same rate as taxes
5. Fire Departments are required to issue refunds for individuals that opt out of the fire dues
According to Deye, approximately seventy-five percent of the counties in Kentucky have mandatory fire dues.
Sheriff Scottie Ward asked about the people (most of them are elderly or disabled) who do not currently get tax bills. Any tax bill $3.00 or less is not issued.  However, with the fire dues of $25 added to all bills, these individuals will receive a tax bill.
"I think we need to get together with local fire departments and discuss this more," said Stevie Givens, First District Magistrate.
"I think we need more feedback from taxpayers; most of the people in my district are against the ordinance. The Fifth District Fire Department does not want it," said Bobby Moore, Fifth District Magistrate.
According to David Whittinghill, Fourth District Magistrate, most of the people in his district supports the fire dues ordinance.

Morgantown Mayor Billy Phelps addressed the court about his concerns with the ordinance.  The City of Morgantown pays all the bills of the Morgantown Fire Department.
"We (City) are not writing checks for refunds to people that opt out of paying the fire dues because we would be refunding more money than we would receive," said Phelps.
Taxpayers would pay the $25 to the county, the Sheriff, and PVA fees would be deducted before the money is sent to the fire departments.  However, the fire departments would be required to refund the full $25 to people that opt out of the dues thus creating a deficit.
Morgantown Fire Department is currently the only department that does not have a board.  It was suggested that a board might need to be formed for Morgantown Fire Department to receive the money from the fire dues.
Finally, David Whittinghill made the motion to approve the first reading of the Fire Dues Ordinance; Johnny Tuck, Second District Magistrate, seconded the motion.  On a roll call vote, the motion was approved by a 3-2 vote with Givens and Moore voting no, while Tuck, Whittinghill, and Chad Tyree, Third District Magistrate, voted yes.
After the vote was approved, Shane Wells, a Rochester Fire Department Board member, said that the fire departments had only had one meeting with Richard Henderson concerning their input on the ordinance and none of their suggestions were considered.
"We don't appreciate being locked out of the process," said Wells.
Dillon Bryant, of Fifth District Fire Department, echoed Wells' comments.

Rhoda Chrism addressed the court," I was appalled when I read the media account of the July 25th meeting.  We have the most respected ambulance service in the area; they are the best, and they save lives every day. As a taxpayer, I want police protection and ambulance service."
Chism referenced comments made by Carlis Raymer in the July meeting suggesting that the ambulance service should be turned over to an outside service provider to save money. Raymer said the company that covers Todd County could service Butler County for approximately $13,000.00 per month.
According to Chism, comparing Butler County to Todd County is like comparing apples to oranges.  She listed several health disparities between the two counties that would make ambulance coverage very different.
"I want an ambulance service run by people I know and trust," said Chrism.
EMS Director Brian McKinney stated that he knew the person/company that provides the service in Todd County.  "I spoke to him, and he said he never talked to Raymer; the only person who called him was David Whittinghill."
Chism also took issue with Whittinghill's comment in the July meeting, "the Court created the board and taxing district and had the power to do away with it," when Judge David Fields said that any decision about changing to outside service would have to come from the Butler County Ambulance Board.
Chism made it clear that she did not appreciate a magistrate making that type of comment and feels the ambulance board is very responsible and does an excellent job.

Patty Craig addressed the court expressing her experience with the ambulance service when her late husband Larry Craig was ill.
"I want to trust the judge and our magistrates to do the right thing.  I don't want to come to these meetings.  I want you to take care of our business, but I am here because you're not."  She also expressed her concern about the comments made during the July meeting.
Raymer said that he was a concerned citizen that attended all the meetings and always fights for the taxpayers when he sees what he considers waste. He acknowledged that Chism was very smart and well educated but sometimes common sense is needed when looking at issues.

The court went into closed session to discuss personnel issues.  They considered applications for Reed's Ferry operator and will conduct interviews on Thursday evening in a called meeting.
After returning to open session, the court approved advertising for a seasonal employee for the road department.
Magistrate Tuck also requested that the court takes bids for the demolition of the Woodbury Hotel.