Ambulance On The Green 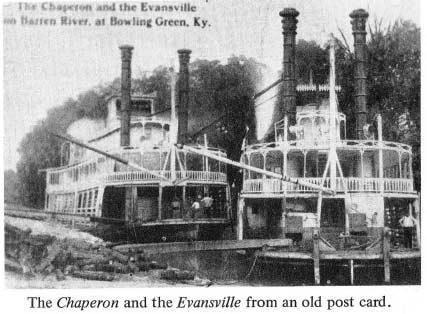 “I remember I cried when I heard the “Evansville” had sunk,” recalls Morgantown resident Wanna Evans with her sharp 93 years young, mind’s eye. The stately boat could be counted on to make two round trips weekly between the cities of Evansville and Bowling Green with scheduled stops between. The steamboat caught fire, burned and quickly sank in 1931 near the Bowling Green landing according to Agnes S. Harralson in her book, “Steamboats on the Green,” Kentucke Imprints,1981 pp.136-9.

One function, seldom thought of, during its tenure was the ambulance-like role during part of the span of years from the completion of the Rochester dam in 1838 until the advent of the modern ambulance with modern highways to travel on. An example to consider happened about 1928. Evans was about age nine. The patient was in immediate need of surgery.

“I remember six or eight men, some on either side, carrying Cary Lawson Pendley on an army cot type of bed. They cut across our front yard. I remember mom saying she might not make it,” said Evans. The group began their transport from the Provo general store. The patient had to be carried a mile to meet the steamboat “Evansville” which was traveling upstream to Bowling Green. Days later, word was received that Pendley survived the surgery. She would go on to live 84 years.

Thinking back, Ms.Wanna can remember two others from Provo who “caught a ride” on the Evansville who were in need of medical care. Mr. Staples had developed a bone felon (infection) while Mrs. McKenney needed gall bladder surgery, according to Evans. Both were taken to Evansville on the “Evansville” and both lived to 74 years and 77 years respectively.

Just this week, someone at the barber shop announced that he was born at the best possible time. That’s true, though it sounds like three from another time might have said the same.

Story and photos by Roger Southerland

Submitted by Phil White (not verified) on Mon, 11/21/2011 - 7:31am
Very interesting story!
Submitted by Linda E. Deweese (not verified) on Mon, 11/21/2011 - 4:00pm
That's my mama! At age 93, her mind is sharp as a tack. It amazes me how vivid everything is in her memory. She remembers the first funeral she attended as a child and what the deceased man was wearing. It would be nice to see more of her memories printed for the younger generations to read. Roger, thanks for sharing. Good to know she took time away from her favorite basketball team to talk with you.