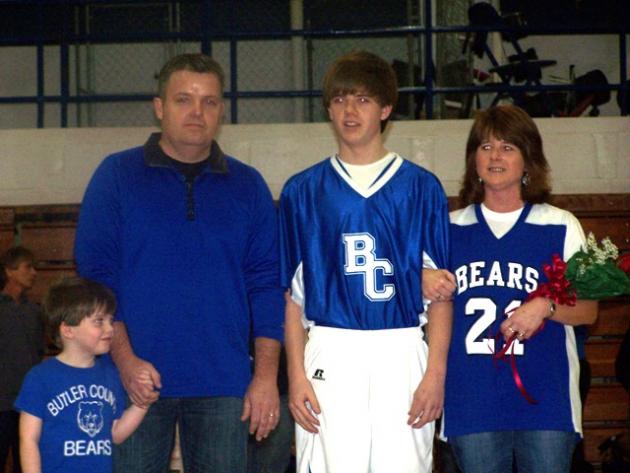 Thursday , January 19th, the Butler County Middle School gym was packed.  Why……to celebrate the ending of an era for several middle school athletes.  For several students their middle school careers are about to become their high school careers.  Both girls and boys 8th grade basketball players as well as 8th grade cheerleaders were honored and recognized.  The boys basketball team is proud to have nine 8th graders on their squad.  They are as follows:

Jacob and Cara Skipworth, children of Frankie and Misty Skipworth

Nolan Johnson, son of Dan and Michaelle Johnson (pictured above)

Also honored were the girls 8th grade players who didn’t get recognized during their season due to their last home game being cancelled.  The girls team had four 8th graders.  They are as follows:

Cara Skipworth, daughter of  Frankie and Misty Skipworth (pictured with her brother)

The cheerleading squad also has four 8th graders.  They are as follows: