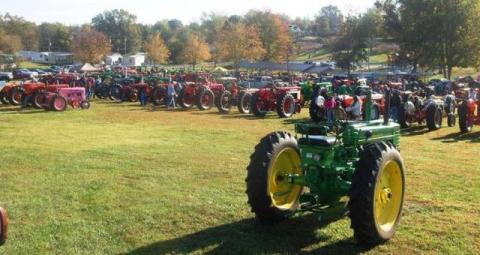 By all accounts the 2011 Butler County Antique Engine and Tractor Club show, held Friday and Saturday at Charles Black T. City Park, was quite a success. This year, the event hosted the Ferguson Enthusiasts of North America East-Central show as well. Event spokesman, Roger Tanner, reported the total participation at 251 items including:142 tractors, 12 cars and trucks, 37 engines, 35 lawnmowers
10 chain saws, 8 pieces of farm equipment and 7 miscellaneous items.
“The factory assembly production of the 1949 TO 20 Ferguson took about one hour and 37 minutes,” said Jeff Miller, with Steiner Tractor Parts of Lennon Michigan, at their exhibit. With four volunteers from the crowd, Miller and his group achieved the task in 57 minutes.
Vendors and entrants from New York, Virginia, Ohio, Indiana, Illinois, Michigan, Tennessee and of course Kentucky.

Story and photos by Roger Southerland