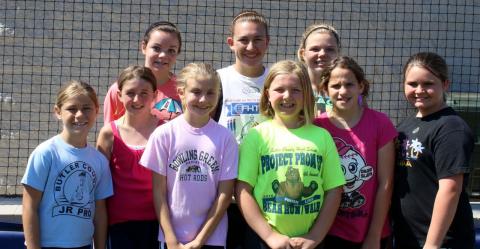 The Butler County High School softball team held its 11th Annual softball camp last week - June 11-14 — at the field for girls ages 7-12.  The 2012 camp had 24 girls attend — one of the largest in camp history.

The players were instructed in the basics of fastpitch softball, including bunting, hitting, sliding, defensive mechanics (infield and outfield), and pitching/catching.  Each player received a certificate of achievement for their completion of the camp, as well as a camp t-shirt.

Serving as "coaches" for the camp were players on the BCHS and BCMS softball teams.

"I think campers learned a lot about softball and had fun in the process — and that's important," said Coach John Embry.  "They were a great group of kids who worked hard and listened well.  Attending camp is a great way to prepare for middle school and ultimately high school softball and we're grateful they took advantage of this important opportunity."