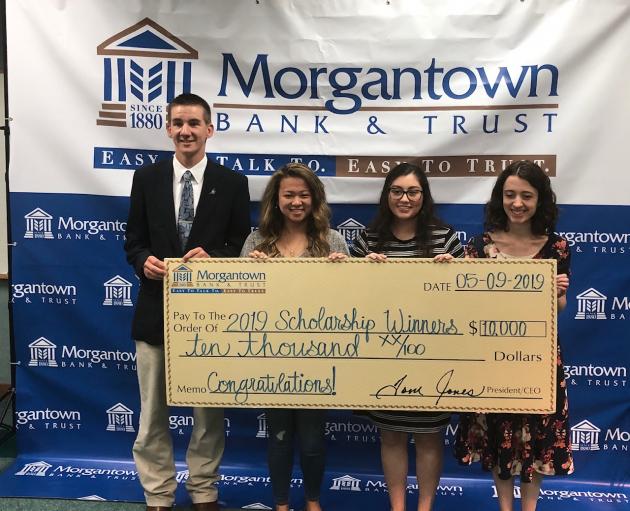 Morgantown Bank and Trust hosted the four scholarship winners at the Data Center on Thursday afternoon. Winners include:

Julia Bonilla – Student of Butler County High School – 3.96 GPA, she plans to pursue a degree in Dental Hygiene with a minor in Spanish from WKU, this year alone she has been an officer in four different clubs and received over 500 hours of community service.  Member of the band from 2011-2019.

Luke Jacobs – Home Schooled – 4.0 GPA, while he will be a graduating senior, he will also be receiving an Associated degree from South Central Kentucky this month as well.  Luke plans to pursue a master’s degree from WKU in Plant and Soil Sciences.  Luke is a Student Ambassador at SKYCTC, is actively involved in 4-H, is a Page at the Kentucky State Legislature, and is a fiddle player in a bluegrass band.

Dana Newland – Student of Butler County High School – 4.0 GPA, she plans to pursue a degree in Occupational Therapy from EKU, she works at the Boys and Girls Club and is an officer of FCCLA, Beta, and is a member of FBLA, Pep Club, and Sources of Strength.

Amy Poff – Student of South Warren High School – 4.0 GPA, she plans to pursue a degree in Family Studies with an emphasis on Human Development from Brigham Young University.  Amy is actively involved in music, having participated in the Nashville Community Choir and Bowling Green Youth Orchestra, school choir and school orchestra, and has instructed private piano lessons.