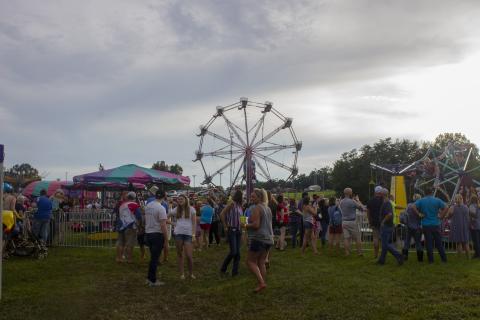 A Guinness World Record was broken, over four thousand dollars in prizes were given away and many events marked a “first” for the 39 annual Green River Catfish Festival this year.

The festival took place over the holiday weekend from Thursday, July 4 to Saturday, July 6. The yearly event took place at the Charles Black City Park and drew over 6,000 people to the area.

The Catfish Festival has acted as the Butler County fair ever since its beginning in 1981. Festival Chairman Robin Johnson said that numbers of people have continued to rise every year and that regardless of the rain, they received a large turnout this year.

The festival opened on Wednesday strictly for the festival’s first ever Special Friends Day. This event received many sponsors and allowed those with special needs to experience the rides and festivities before the general public arrived on Thursday.

Gates opened at 4 p.m. on Thursday and Friday and at 9 a.m. on Saturday. Carnival rides and the children’s adventure zone opened at 6 p.m. each day. Butler County 4-H projects and Butler County Open Division contest projects were on display at the Eva J Hawes Building daily from 5 to 9 p.m. An art showcase provided by the Butler County Art Guild was also on display daily at 5 p.m. at Pavilion #1. $500 paid entry drawings took place at 8 p.m. every day. Daily entertainment also took place each night at the main stage.

New events to the festival this year included a Fortnite tournament, Dino-Roar show, power wheels crash-up derby and a catfish wrastlin’ tournament. Food vendors of all types were present as well as local businesses and services.

The festival officially kicked off on Thursday morning with the annual terrapin race including over 200 turtles racing and prizes for many children.

Butler County’s first ever Alumni Band, consisting of previous band members of all ages and graduating years, performed at the festival as part of the opening ceremonies. A tagged fish drawing and other drawings as well as the special fishing tournament awards were then announced. The Rose Band, which Mayor Billy Phelps announced has been playing at the festival for over 30 years, took the stage at 8:15 p.m. following the announcements made for the new Guinness World Record Title.

The Guinness World Record Attempt for the Worlds Largest Paper Ball Fight took place at the tennis court. All participants were counted prior to the event with the final number of participants, before deductions, being 660. With the previous record being 282 participants, a new record was broken by the city of Morgantown.

On Friday, a dog show took place following the Car/Hot Rod Parade through the park. Twang and Round, a rap group performed at 8:15 p.m. that night and recorded a portion of their music video at the festival.

The Butler County Chamber of Commerce was pleased with the turnout this year and many in attendance said they expect next year to be even bigger, given that it will be the 40th year anniversary of the Catfish Festival.

Above is a gallery of photos from this years Green River Catfish Festival. For more information or a summary of this years events, visit Beech Tree News’ other festival related articles.