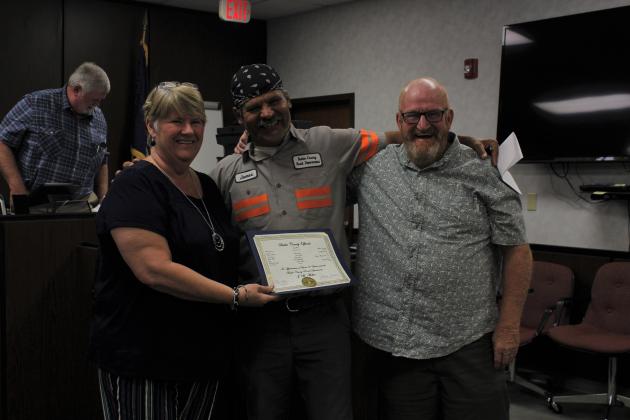 Butler County Clerk Sherry Johnson gave a presentation on the county tax rates for the 2019 fiscal year and received approval to begin sending them out.

Morgantown City taxes will now be printed on the county bills instead of residents receiving two separate bills as they previously did. Johnson said that most rates remained similar while a few had small variations. Real estate and tangible taxes for the City of Morgantown show a decrease while Rochester and Woodbury remain the same. Butler County ambulance and real estate for county schools show a decrease. The county overall taxes shows a point one decrease for real estate, tangible and inventory while aircraft taxes went from zero to 7.9 from the following year. Caney Creek and County library real estate show a small increase.

The 2019 tax rates are as pictured below:

Johnson also spoke on the request for the clerk’s office to receive two new Verity voting machines in place of the current ones for absentee voting. Johnson said that she would like for her staff and herself to have time to become acquainted with the new machines to be better prepared for the voting season. The two current machines at the office will be traded in allowing for an approximately $1,000 discount and according to a quote given by Harp Enterprises, will bring the total for the new machines to $12,193. The motion to purchase two new machines was approved.

James Miller was presented a certificate on behalf of the officials and the road department in appreciation for his 30 years of service with the Butler County Road Department.

“He’s been one of the most dedicated employees here,” Third District Magistrate Timmy Givens said.

A motion was also made by Givens to give Miller a 25-cent raise. The motion was approved.

A discussion took place on the Stop the Landfill Group. Frank House, leader of the Stop the Landfill group, gave a presentation at the August meeting and requested money from the fiscal court. As part of action, Judge Executive Tim Flener, Second District Magistrate Kevin Phelps and House met with Doctor Groves and Attorney Joseph Brant to ask questions regarding the situation. Flener said that he was unsatisfied with the answers given by Groves and followed with a meeting with Attorney Joseph Brown. Brown’s comment were directed toward concern for the study that was being conducted on the possible landfill and stated that Groves was the person to speak with. No further action has therefore been taken yet on the topic of the landfill. The fiscal court will be attending a solid waste management conference at Lake Cumberland this weekend and will be asking more questions.

A hearing was held on Paradise View Road earlier on Monday Sept. 9 and recommendations were given to the landowner on what corrections would need to be done for the city to take on ownership of the road. The court will give the landowner appropriate time to make changes.

Flener said that different ideas have been thrown around recently on what to do with the annex building located where the old shopping mall used to be. Flener recommended that because a decision has not been made, the annex building could be sold for surplus. One citizen in attendance asked Judge Flener what his plans would be for the Butler County Health and Fitness Center that is currently located there and what his plans for the Senior Citizen Center would be.

“Right now we are still exploring our options on that peice of property that the county owns,” Flener said.

A motion was made to sell the property with a vote of 3-2 with Magistrates Phelps, Bryant and Timmy Givens in favor and Whittinghill and Stevie Givens opposed. The motion passed.

Flener gave a reminder that the North Park celebration will take place at 4 p.m. on September 21.

Flener also invited all to attend the Butler County 4-H fundraiser on Thursday, Sept. 19 when the 4-H trap shooting team will be challenging all elected county officials to a trap shoot. The event will take place at the Leonard Oak’s Conservation Club and will start at 4 p.m.

“We're happy and proud to be able to participate in this,” Flener said.

Other items of businesses included:

Approval to issue a check the Butler County Ambulance Service in the amount of $10,000 for payment of FY 19/20 Ambulance Grant Fund Reward

Approval of appropriations from the Butler County Rescue Squad to pay Finley Fire Equipment in the amount of $4,679.81