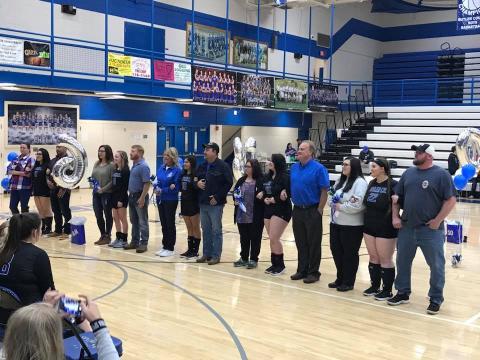 The last week of the regular season saw the BCHS Lady Bears bring home three more victories, defeating Caverna twice and Barren County.  On Monday the girls traveled to Caverna and the JV squad got thing off right winning in straight sets with scores of 21-12 and 21-8.  Coach Flener said that the JV team played as well as they had all year, seeing no effects from being off for fall break.  The varsity squad won the first set easily 25-17, but dropped the second set 22-25, before winning the third set 25-18.  Coach Minton is hoping the girls will play more consistent and communicate better before district tournament next week.

On Tuesday the girls traveled to face Barren County in a F/JV/V match-up.  The freshman team won the first set but lost the next two.  This was their last game of the year.  Coach Dockery said the girls have worked hard and made big improvements and looks forward to working with most of them on the middle school team this spring.  The JV team continued their winning ways by taking down Barren in straight sets, 21-15, and 21-9.  The varsity then followed suit also winning in straight sets 25-19 and 25-20.  Grace Embry had three blocks against Barren and two against Caverna to give her a total of 30 blocks this season, which is a new school record breaking Hannah Whittinghill’s previous record of 25 for a single season.

Thursday night was the last regular season game as Butler hosted Caverna.  The JV squad started a little slow dropping the first set, but rallying to win the next two.  With the victory the junior varsity team finished the year with a 12-4 record.  This is the best season that any JV team has ever had in BCHS history.  Coach Flener is very proud of the effort that each player has given and the improvement made by the team this year.

After the JV game Butler honored five senior players: Megan Blunk, Samantha Diaz, Lilly Gidcumb, Emily Grider, and London Howard.  Megan, middle blocker, has played for four years and has battled through some injuries this season, but continued to improve her game and has become a strong server.  Samantha, outside hitter, has also played for four years and is one of the most positive players on the team.  She is always ready to play when her number is called.  Lilly, setter and co-captain, has played for eight years (2 at BCHS) has been a solid all-around player for the Lady Bears. She holds the record for Aces in a game (9) and also for the number of Sets in a season and career. Emily Grider, middle blocker, has played for 4 years (1 for BCHS). She has played as setter and outside hitter at other schools, but was used as a middle at Butler.  She has brought new excitement to our program.  London Howard, setter, has played for eight years (2 at BCHS) and is known not only for setting but also for a strong serve. She has the second most aces and serves for the Lady Bears this year.  All of these girls will be greatly missed.

When the senior recognition was complete the Lady Bears took to the floor for the last time in the 2019 regular season and once again came out with a win, defeating Caverna in three sets with scores of 23-25, 25-20, and 25-14.  All five seniors started and played most of the sets until being sub out on the last point to a standing ovation by the fans.  The girls set a goal at the beginning of the year to win at least 15 games, Thursday night they accomplished just that.  Another goal that the girls have is to reach regional play.  In order to do that they must defeat Whitesville Trinity in the first round of district on Monday.  District tournament is held at Whitesville on Monday and Tuesday, October 21st and 22nd.  Grayson County plays Edmonson County on Monday at 5:45 with Butler County facing Whitesville Trinity afterwards.  Please come out and cheer the Lady Bears to a district win.