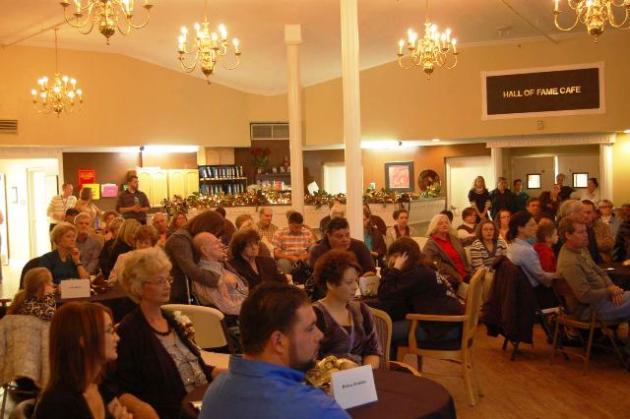 The mission statement of the Morgantown Care and Rehab Hall of Fame Café speaks for itself: “To recognize, celebrate and honor those who have distinguished themselves through their success in public service; distinguished military service; professional accomplishments; contributions to the community; and personal achievements.”

“The Hall of Fame program allows us to catch a glimpse of the wonderful people in our midst,” said Linda McDaniel, Director of Clinical Development.  She traced the program’s eight year history, first with the honoring of residents and later including stakeholders and community leaders.

This year’s induction of four individuals into the Hall of Fame Café, held Thursday night in the lobby of MCRC, was once again a celebration of achievements. Those inducted were Forest White, Linden Day, Debra Jenkins and Iris Moore.

Closing remarks were by Tiffany Clark, Administrator. “Forest, Linden, Iris and Debra; thank you all for letting us share your lives tonight. You all mean the world to us,” said Clark.

Plaques dedicated to present and past inductees are on display inside the “Hall of Fame Café” on the main level. Allow ample time to appreciate the achievements of each recipient.

The  four individuals, each added to the list of inductees, were introduced to those attending the Morgantown Care and Rehab Hall of Fame event. Each sat at center stage as Shirley Allen, Director of Volunteer Services honored each recipient by reading aloud a summary of their life achievements. Those tributes are reprinted here courtesy of Mrs. Allen.

FOREST WHITE
Born on September 12, 1929, Forest White spent a great deal of his life sharing his time and multiple talents with others. He has been married to Joyce for 56 years and they have four children. Always a patriotic gentleman, he served in the army 4 ½ years during the Korean War. He later worked at and was retired from Chevron Oil Company as a terminal operator. An active church member, he served as a deacon, song leader for over 20 years, taught the Adult Sunday School class for two decades and helped originate the “New Liberty Band”. He sang and played his guitar with the very best! Forest founded the Friday Baptist Church Program at Morgantown Care and Rehab and was an active volunteer there for 20 plus years. His loving advice and caring demeanor had no equal. Many residents flocked to his services and he was constantly referred to as a Godly man. Being a servant was his goal and he often worked in his home community---- taking folks to doctor’s appointments and constantly visiting shut-ins or acting as a skilled mechanic. He will always be hailed as a true “good Samaritan” who tirelessly served his Lord well.

An engaging entrepreneur was born on August 8, 1927. Linden C. Day’s father was involved in the restaurant business which perhaps helped indicate his elected interests later on. He was a member of the 93rd Airdrome Squadron from 1945 until 1947 where he received the Victory Army of Occupation medal-Japan for honest and faithful service to his country. Linden was married to Lavena and had three daughters---Diana, Leona and Mary. This enterprising couple became the owners and operators of a prosperous restaurant, a skating rink, barber shop, beauty shop and hotel. These were the days of a $2.00 T-bone steak dinner and 45 cent banana splits. Tragedy struck in 1971 when the entire complex burned to the ground. Rebuilding and opening the profitable restaurant again was foremost in Linden’s mind and it became a reality in what he touted as the “cleanest restaurant in town”. Linden was a well respected member of the Butler County community as well as Ohio County. He ran for City Council with 28 years of business experience and was active in the Morgantown First Baptist Church; he even drove a school bus for 16 years. His family and his life of enterprise and service are his greatest legacies.

Debra Jenkins was born on November 28, 1956. She toiled at various occupations—selling Tupperware, factory work and as a store clerk—before coming (as she said  “being led by God”) to Morgantown Care and Rehab, twenty years ago. She began as a CNA and progressed to CMA—proving her trustworthiness and establishing her work ethic. This conscientious lady was married to Billy Joe and has three children and three grandchildren. She has occupied her spare time teaching Vacation Bible School, Sunday School, being a WMU leader, and singing beautifully with a local gospel group. As if Debra wasn’t busy enough, she has served on the Signature Sparks committee, Safety committee, Revolutionary Team, Fall Festival group and assisted with the Hall of Fame. Much of this she accomplished as a willing volunteer. This engaging lady has also been a part of holiday celebrations and used her delightful voice to accent with MCRC musical activities. She works diligently and is always willing to assist where needed. Debra constantly tries to mold herself to serve her Lord to the best of her ability.

The engaging lady who grew up to be so benevolent with her time was born August 19, 1939. Iris Moore received her high school education and was later licensed to be an X-ray technician. She worked as a Medical Assistant to a local physician for 40 years and accumulated a legion of followers who loved her. She was married to Harold and had five sons. She has always visited the sick and afflicted and has taken needy folks to the doctor for years. She was instrumental in starting the local King Home Care and worked there 6 ½  years. She was honored as their regional employee twice during her tenure. Iris is a foster grandparent and became a volunteer at Morgantown Care and Rehab two years ago. There, she has operated the Coffee Shop, taught a Sunday School Class on the Skilled Unit every Sunday, acted as door monitor and prepared numerous baked goods for special events. She was a recipient of the prestigious regional Jefferson Award based on her life achievements and has even involved her grandchildren in volunteer experiences. She has spent her life ministering to the needs of others and is a model citizen for her home community and county.

Submitted by Linda Deweese (not verified) on Tue, 15/11/2011 - 3:07am
Congratulations to each new member of the Morgantown Care & Rehab Hall of Fame. Thanks for your contributions to our county and the nursing facility.