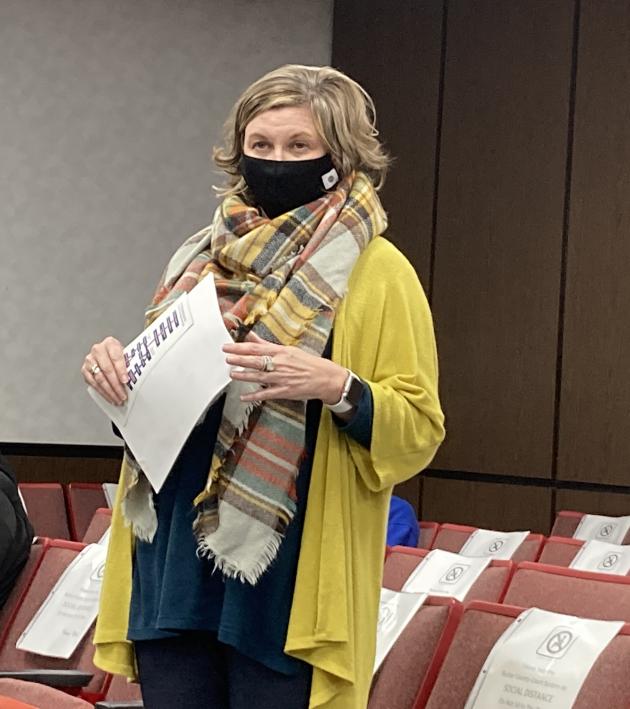 The Butler County Fiscal Court met in regular session on Monday, February 8, at the Bulter County Court House. All magistrates were in attendance. Second District Magistrate Kevin Phelps participated via the internet.

The Court approved a $525 bid from Advance Heating and Cooling to reconfigure the existing ductwork to correct temperature differences in the PVA and County Attorney offices. (Last month, the Court tabled a motion to pay Kinser $4,500 to install a new unit in the County Attorney's office.)

The 23 five-gallon buckets of rubberized roofing material were checked and found to be useable. The Court agreed to use the roofing on the Morgantown Fire Department building and place the remaining buckets in surplus to be donated to the Morgantown Mission to help people in need.

Judge Flener asked the Court for specs on the courthouse painting and wrapping of the columns.

Butler County Sheriff Scottie Ward presented a budget amendment to reflect a 1.4% increase in his salary. The state sets the sheriff's salary. The Court approved the amendment.

Chrisie Sherrard, Assistant Director of the Barren River Area Child Advocacy Center presented information to the Court concerning the center.  The  Barren River Area Child Advocay Center (BRACAC) reduces trauma to child abuse victims by providing one safe child friendly location where teams of professional work together to pursue justice and offer treatment.  In 2020 the BRACAC provided direct services to 843 children (0-18yrs.), of which 47 children were from Butler County.  The Court approved an allotment of $1,500 to the Center.

The Court approved the purchase of a truck cab from Dudley Childress at the cost of $850 and the cost to repair ( $4,000-5,000) the Freightliner truck owned by the county.

The Court had a lengthy discussion concerning a 6110 John Deere tractor and 10' boom mower quote. The quote of $143,304.08 included a joystick instead of five levers in operating the boom mower.

Third District magistrate Timmy Givens expressed concern with the additional $9,000 for a joystick.

"We have a joystick mower now that has been getting repaired for over a month," added Givens.

The Court voted 3-2 to purchase the tractor with the joystick. Dillon Bryant and Timmy Givens voted nay.

The next piece of equipment considered by the Court was a Boyd/Whayne Cat backhoe. The quote was $89,890 with the trade-in of the 2005 backhoe. The Court approved the purchase 4-1 with Timmy Givens voting nay.

Butler County has been awarded an Open Dump Grant to address illegal dumping. The dumpsite is located at 411 Morris Lane. According to Judge Flener, they are waiting on the processing of the grant.

Judge Flener told the Court that the Butler County Rescue Squad is in need of a newer, more dependable truck.

They would like a 4X4 and a four-door model. Flener asked the magistrates to look at the surplus auction and see if they could help them find a Rescue Squad truck.

Second District Magistrate Kevin Phelps said that someone has pulled a camper out to the Woodbury Campground and left it. The trailer has been there for about three weeks. No owner has been located after several attempts by various people. County Attorney Dick Deye said the county has the authority to tow the camper away.

The Court approved by a 5-0 vote the following: