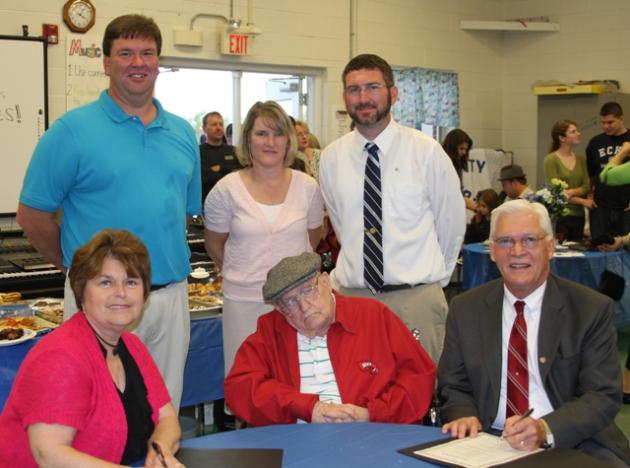 Before he was the mayor, he was the founding band director at Butler County High School.  On Sunday, they honored him. A standing-room-only crowd of former band members, friends, family and well-wishers were on hand Sunday afternoon, September 25, at the old band room to honor former Butler County Band Director Charles T. Black.

The event, organized by Linda Tyree, brought together band members spanning the decades – many of whom came with instruments in hand and played some of Mr. Black’s favorite songs, including Christmas Parade favorite “O Come All Ye Faithful” and the BCHS fight song.

Photos were brought in from former band members, which will be scanned and made available on a CD.  Band members from as far back as the 1950’s joined the current band members, along with Director Jason Ausbrooks, BCMS Director Boyce Flener, and BCHS Choir Director Daryl Dockery, in honoring Mr. Black.

Those in attendance reminisced about the past, shared their favorite band stories, and their fondness for Mr. Black, as well as his dedication to the Butler County High School Band.

Names and faces may have been forgotten, but laughter, smiles, and even tears were shared on Sunday afternoon to honor one man who has meant so much, to so many in this county.