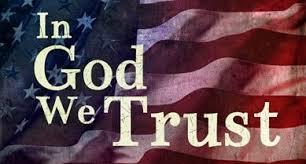 When classes start in the next few weeks, every school in Kentucky will have to prominently display the national motto “In God We Trust” as a result of a new law passed by the 2019 General Assembly.

Butler County Schools are also considering different options as to how to comply with the law.

“All schools across the state are working to fulfill the new state law that requires our national motto “In God We Trust” be displayed in a prominent place before school begins.  Our district is in the process of deciding how we want to proceed,” said Butler County Schools’ Superintendent Scott Howard.  “There are various ways to the display the motto. We could use a stencil and have it painted or use some type of plaque or individual letters. We could get the art classes involved at each school and let students design it.  I look forward identifying a prominent place in each building and moving forward with this new law.”

One regional PTA president said Thursday that she thought the requirement violated the separation of church and state but didn’t anticipate launching formal opposition.

To comply with legislation filed by Republican State Rep. Brandon Reed, a minister from Hodgenville, some school districts have already put up mounted plaques or artwork in common areas. Others such as Woodford County, are still working out the details.

Jessamine County school officials chose framed art costing $35 each that depicts an American flag and a bald eagle, the emblem of the United States of America, in addition to the motto. The art is being placed in the schools’ front office area.

District officials selected a plaque that not only meets the requirements established by the legislation, “but one that would catch the attention of our students, staff and visitors,” said Jessamine Superintendent Matt Moore. “We also provided the flexibility for schools to select plaques that matched their existing interior designs. “

“We tried to find something that was sturdy that would last the test of time while also being cost effective,” said Superintendent Mark Kopp.

“We decided to place our motto above our Veterans Day picture,” said Superintendent Jimmy Dyehouse. “Every student and teacher in our building participated in the ‘Living Flag’ which was a tribute to our local veterans. This took place during our yearly Veterans Day Service. “

He said the motto will be the first thing students and parents will see when they walk into the school.

Jefferson County Public Schools will have small posters up by the first day of school and those are being developed, said district spokeswoman Renee Murphy.

Fayette County Public Schools’ officials didn’t comment Thursday on their progress in complying with the law.

But in June, district spokeswoman Lisa Deffendall said, “Like every school district in the Commonwealth, we will comply with the law. We are still working on the logistics of how best to meet the new requirement.”

Penny Christian, president of the 16th District PTA that includes Fayette County, said Thursday that she thought the law was a violation of “separation of church and state.”

“I think it’s a blurring of the lines,” she said.

Christian said she hadn’t received complaints or requests to fight against it and she didn’t foresee winning if a fight was initiated.

She said there were education issues in Kentucky that were much more important to kids, such as keeping the decision-making powers of school councils intact including preserving parent participation, and funding public education.

“We have to choose our fights,” Christian said.

In February, before the law was passed, members of the American Civil Liberties Union—Kentucky wrote to legislators asking them not to approve it.

“We ask you to refrain from mandating any religious observation or exercise of religion in our public schools,” their letter said. “We firmly believe that our legislature should be working to ensure that schools are adequately funded, that teachers are appropriately compensated, and that our students receive the highest quality education possible. “

“To do right by our students, these should be our priorities – not mandating that every school in the Commonwealth display a motto that has the appearance of endorsing religion,” said the letter.

ACLU Communications Director Amber Duke said Thursday that parents and students “who feel like their rights have been violated or have questions or concerns about the implantation of the ‘In God We Trust’ motto law can contact the ACLU of Kentucky via our website aclu-ky.org.”

Editor's Note:  The section in italics was added to the story by Beech Tree News in order to address what efforts are being done locally to comply with this new state law.