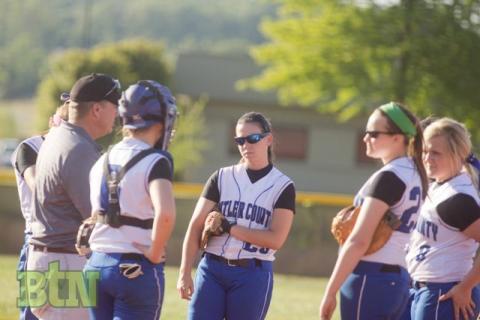 Last week proved to be a tough one for Butler County High School softball as the Bears fell to two district opponents - Grayson County and Edmonson County - by a score of 3-2 and 5-1, respectively.  The losses mean Butler County (15-10) will either be a #2 or #3 seed for the 12th District tournament and will face Edmonson County for the third time.

The Bears had another bit of bad luck as second baseman Natoshia White, who also leads the team in RBIs, was out for the week with a knee injury suffered the previous week.  She joins Lynsie Clark on the sidelines, who is still recovering from broken bones in her foot and hand.  White is expected back this week, while Clark is hoping to return to the lineup in time for the last week of season and the district tournament.

Butler County battled hard for seven innings against 12th District favorite Grayson County at Leitchfield before faltering in the bottom of the seventh.  With the game tied at 2-2, an untimely error and walk set the stage for a no-out double to right field by Grayson pitcher Victoria Decker for the game-winning third run.

Jazmin Reynolds made a pair of nice catches in left, while catcher Amy Rogers caught two baserunners stealing - one at second and one at third.

"We played a pretty solid game overall - Grayson just got the big hit they needed at the right time," said BCHS coach John Embry.  "Morgan (Manning) turned in a strong pitching performance, the kind we'll need moving forward from here and into the post-season."

Thursday's game against rival Edmonson County was a totally different story as the Bears struggled offensively and defensivley in the 5-1 loss.

"We just didn't play very well at all.  In fact, it may have been our worst outing of the year, especially at the plate," said Embry.

The Bears were able to squeeze out a lone hit - an Amy Rogers triple - against Edmonson pitcher Paige Carnes, who dominated BC hitters with 10 strikeouts, four of which were looking.

Hannah Peach had a sacrifice fly to score the Bears' only run of the game.  Allie Howard made a diving play in right on a well-hit ball.

In JV action, Butler dropped a 6-3 decison to Grayson and lost 5-2 to Edmonson.

Butler County also had a nice double play on a ball hit back to the pitcher, Kassie Phelps, who threw to first baseman Hannah Peach for out number one.  Peach then threw the ball home to catcher Candace Ibarra for the tag at the plate.