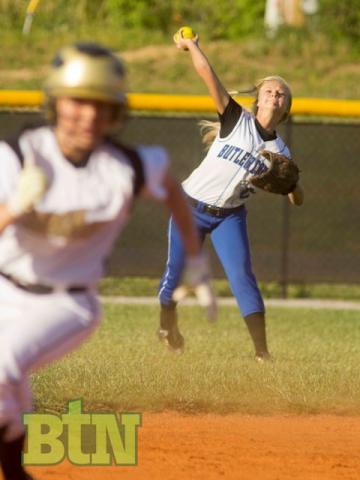 The Butler County High School softball team picked up its third 12th District win last week with a hard-fought 5-4 decision over rival Edmonson County at Brownsville.  Later in the week, the Bears easily downed Russellville (18-3) on Thursday, before getting a pair of wins on Friday in the rain-shortened Greenwood Border Battle.  Butler defeated Warren Central 11-1 in five innings and handed Henderson County a 5-3 loss.

Butler County had nine hits in its 5-4 win over Edmonson.  The Bears plated one run in the first before the Lady 'Cats tied the game with a run in the bottom of the fourth.  The Bears answered with two runs each in the fifth and seventh innings.  In the see-saw match-up, Edmonson scored a run in the fifth and two more in the bottom of the seventh to make the score 5-4.  The Lady 'Cats had a runner at third and were threatening to score when Manning struck out the batter to record the final out.

Right-fielder Alex Embry connected with catcher Amy Rogers on an important double play in the first inning.  Embry caught a fly ball and threw out a runner at the plate on a gritty tag by Rogers.

Butler County rolled past Russellville 18-3 on Thursday in a game that saw the Lady Panthers open up a quick 2-0 lead.  But, the Bears took charge and never looked back as the game progressed.

Manning allowed six hits and two earned runs.  She struck out four batters and walked one.

In the opening round of the Greenwood Border Battle on Friday night, the Bears easily outpaced Warren Central 11-1 in five innings.

Manning allowed three hits and one earned run, while striking out six batters and walking none.

Butler County earned a solid win in the Friday nightcap with a rainy 5-3 decision over Second Region power Henderson County.

Junior shortstop Madeline Drake started the game on a high note for her team with a solo home run on the first pitch.  The Bears added a second run in the third inning before Henderson took advantage of a couple of BC errors to score a pair of runs in the bottom of the third.  Butler struck again with two runs in the sixth and one run in the seventh to take a 5-2 lead.  Against a steady rain, Butler County's defense and pitcher Morgan Manning held off Henderson County in the bottom of the seventh after the Lady Colonels had already scored one run.  Manning got a clutch, full count strikeout against Henderson's pesky lead-off lefty to preserve the 5-3 win.

Drake turned in a flawless performance defensively at shortstop, as well as a strong offensive outing, and Grubb made an outstanding catch against the left-center fence to save a possible home run. Embry came through with a two-out, two-RBI single to give her team the sixth inning lead.

Manning allowed five hits and two earned runs.  She struck out five batters and walked one.

Both Border Battle games were played without second base slugger Natoshia White, who suffered a knee injury in Thursday's game against Russellville. All Saturday games were cancelled due to weather.